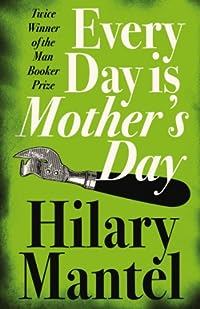 Every Day is Mother’s Day by Hilary Mantel was originally published in 1985 and it was Mantel’s first book to be published.

This is a strange one as the book has so many features in it which I dislike and would normally end up with me really hating a book but against all the odds I did enjoy the reading experience. For one thing it was a treat not to have to re-read sentences to get their meaning, as it’s well written and straight forward.

The main characters are Evelyn and Muriel Axon a mother and daughter who lead a reclusive life in a nice middle class area, however their house is uncared for, as are they. Muriel the daughter has special needs and is attending a day care centre, she has come to the attention of social services and Evelyn is determined to keep the social workers at bay. That’s quite easily done as Muriel’s file is constantly being passed on to different social workers. So when Muriel gets pregnant the only person who knows about it is her mother, and as it’s a toss up as to which of the Axons is dottiest it isn’t going to be a joyful experience.

Meanwhile their latest social worker seems even worse than they are, she manages to lose Muriel’s case file and is having an affair with a married man who to be fair to him is being swamped by kids as his wife keeps ‘starting’ babies, it’s a mystery why because their three existing kids are a ghastly bunch and would put anyone off having a family.

As I said it has so many elements I dislike, there are no likeable characters, most of them are very strange, a philandering husband, feckless wife, a woman trying to break up a family and a house with a horrible atmosphere. I gave it 3 stars on Goodreads, so why did I like it?

I think it was because although lots of the characters were people I really wouldn’t want to have much to do with myself I could see clearly what had led them to the bad decisions and actions which took place, and I sympathised to some extent, it was all very human. I’m looking forward to reading Vacant Possession, the sequel.

Apparently Hilary Mantel, (I suppose I should now say Dame Hilary) did work in a social work department in her early working life, it was obviously a source of good copy for her.

Hilary Mantel was reported to have been rather nasty about the then pregnant Duchess of Cambridge during a speech on royalty.

You can read the very long speech here.

I don’t agree with what she said about the duchess, for one thing she doesn’t seem to know that William Wales chose Catherine because like many young people he fell in love with a young woman that he was at university with. I’m sure it was nothing to do with her being thin or her good manners. There’s a brain there, which is more than can be said for some of the others in the royal family.