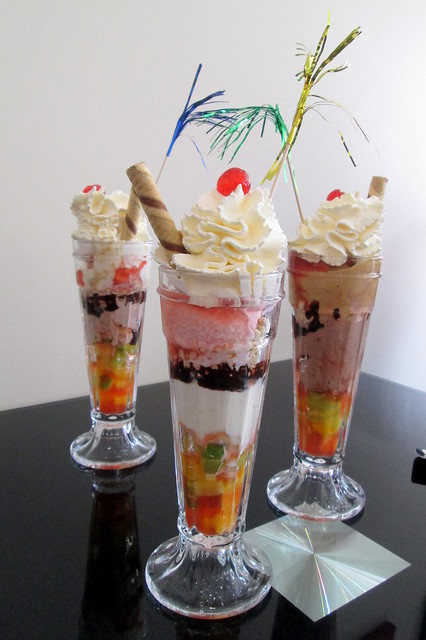 A conversation with Peggy (Peggy Ann’s Post) our visitor from the US about knickerbockers led to me mentioning the ice cream Knickerbocker Glory and I was surprised that Peggy didn’t know what I was talking about although I’m sure they aren’t a particularly Scottish thing. Anyway, the first weekend she was with us we were invited down to Peebles by Evee of Evee’s Blog and when I spotted an ice cream parlour in the town I thought it would be a good chance for Peggy to experience an ice cream indulgence. Jack, Peggy and I had the glories and Evee opted for the Banoffee Split which has a slight nod to healthy eating in that at least you are eating a banana. Mind you the glories contained quite a lot of fruit too. 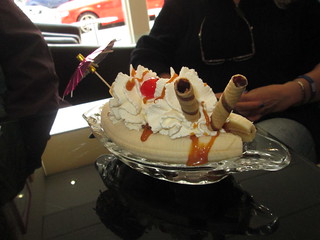 After that it was time to take a stroll around the town and work off some of those calories. In truth we had to wait in the shop until the worst of the rain had passed but that gave us an opportunity to watch a large posse of people of all ages riding along the high street on their horses. Peggy said they would have closed the street off for that in the US and she came to the conclusion that in Scotland we are a lot more relaxed about things like that. Sadly I didn’t manage to get a photo of them, or the couple who high stepped it along the road in a horse drawn buggy.

The Cross Kirk was our destination, the sort of place which you would never find if you were a casual visitor to Peebles so we were grateful to have Evee as our guide. The ruin dates back to the late 1100s and it’s in amongst a lot of houses a shortish walk from the high street, but it’s still atmospheric. I especially liked the stone carving of a knight’s head which you can see above the doorway below if you look carefully. 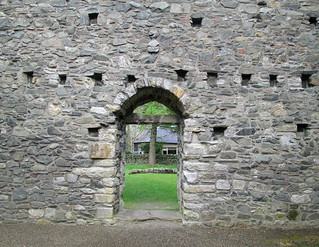 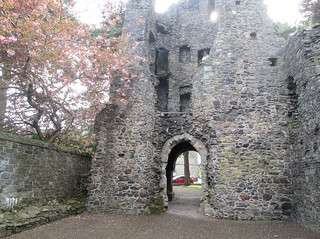 And here we are, what is the collective noun for a group of bloggers? A bevy, bunch, blah or maybe we’re besoms. 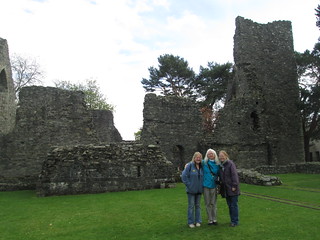 If you want to see some photos of our visit to Dunfermline Abbey hop over to Jack here.

2 thoughts on “Peebles and Ice Cream”