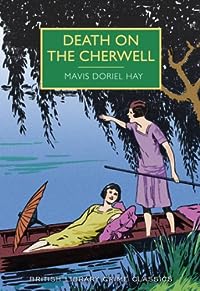 Death on the Cherwell by Mavis Doriel Hay is the second book which I’ve read by the author. I wasn’t too keen on the previous one but I found this one to be much better. It was first published in 1935 but my copy is one of those British Library Crime Classics re-prints.

The setting is a female college in Oxford. That happens to be a favourite setting for me and when I think about it I can trace my love of females in an educational establishment right back to the good old Enid Blyton Malory Towers series.

Four of Persephone College’s undergraduates are intent on forming a Lode League, a sort of secret society, apparently they are popular amongst the students. Their meeting place is on the corrugated iron roof of the college boathouse which is on the River Cherwell.

When they see a canoe coming along the river they’re worried that it might be the Bursar, a woman that they have a very low opinion of. At first they think the canoe is empty but as it floats closer they realise that someone is inside it. That someone turns out to be none other than the hated bursar. Is it foul play, did she commit suicide or was it simply an undergraduate prank which got out of hand? – as the police think.

Mavis Doriel Hay only wrote three books, this one being the second. I found the first one Murder Underground to be less than enthralling but this one which was published just one year later is such an improvement on the first one. Perhaps it was just that the setting was such a familiar one to her and the characters seem more realistic and natural with authentic banter amongst each other.

Coincidentally Death on the Cherwell was published in the same year as Dorothy L. Sayers very much more famous Gaudy Night. The settings are the same, only the actual colleges being different. There were only two women’s colleges in Oxford at that time apparently and it seems that Sayers and Hay used their own alma maters as settings, obviously just changing the names.

Hay only wrote one more crime fiction book but she did write a lot of books about rural crafts, which she was very keen on. She was instrumental in the resurgence of quilting in Wales.

She had three brothers, one was killed in 1916 at the Battle of Jutland, her youngest brother was killed when his Tiger Moth crashed in the Malayan jungle in 1939, in 1940 a third brother who had been captured by the Japanese died on the Thailand-Burma railway and as if that wasn’t bad enough – her Canadian husband who had joined the RAF was killed in a flying accident in 1943. It’s a wonder she stayed sane.

7 thoughts on “Death on the Cherwell by Mavis Doriel Hay”