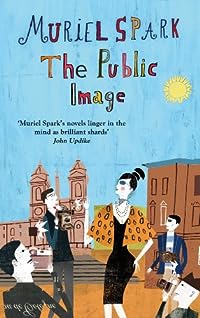 The Public Image by Muriel Spark was first published in 1968. The setting is Rome and it’s about a young actress called Annabel Christopher. The Italians call her the English Lady-tiger and she’s married to Frederick who was also an actor when they first got married, but Annabel’s career has gone from strength to strength whilst Frederick found it difficult to get work. He eventually takes to screen writing instead, but he’s obviously very disgruntled at his wife’s success, and spends his time trying to chip away at her confidence. Annabel is supposedly a bit dim but of course she’s anything but dim.

It’s at a time when image is everything and so it’s very important that the paparazzi see the Christophers as the perfect married couple. Time and time again Frederick has told himself that he will leave Annabel, he has had a string of affairs over they years, but then Annabel gets pregnant and he delays leaving her again.

Meanwhile Billy O’Brien, a long term friend of Frederick’s since they were at drama college together is equally jealous of Annabel’s career and he does his best to cause trouble for Annabel and Frederick too, whilst pretending to be a friend.

I find Muriel Spark’s work to be very ‘curate’s eggish’ in that for me her books are hit and miss-ish and often just good in parts. I thought this was one of the more enjoyable ones but I found the ending somewhat underwhelming and just unsatisfying. I’m glad I read it though, I gave it three stars on Goodreads, I would have given it 3.5 if possible. My favourite of Spark’s books is still The Girls of Slender Means, but I think I’m quite unusual in that.