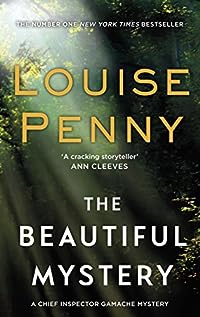 The Beautiful Mystery by Louise Penny was first published in 2012. Unusually this one has nothing to do with the attractively dangerous village of Three Pines in Quebec. The setting is a remote Gilbertine monastery in the wilds of Quebec. The monastery has been there for hundreds of years, with just 24 monks in residence at any time as the environment couldn’t sustain any more people.

The monastery had originally been set up by monks who had been fleeing the Inquisition but they had always been great singers and Gregorian chants had become almost a religion in themselves. Bizarrely they had had a hit with a record and had made lots of money which had been used to renovate the monastery which had been very basic, with nothing in the way of heating, making life there in the winter very difficult.

But all was not well within the community and murder was committed which is why Armande Gamache and his trusty assistant Jean Guy Beauvoir have been summoned to the remote monastery which is in the middle of a large lake. Nobody other than the monks ever gains entrance to the place and the boatman who ferries them there is confident that he’ll only have to wait a few minutes for them before they end up back at his boat for the return journey. So he’s amazed when they disappear into the building. There are 23 monks in the monastery and one of them is a murderer.

Of course Gamache and Beauvoir get to the bottom of it but Beauvoir is still fragile mentally after a previous case went disastrously wrong and it all comes back to haunt him in this one. Gamache has known for a while that someone within his own force is out to get him and it becomes a wee bit clearer who it is in this book. I did find some bits of it quite predictable though. Top marks to Penny though for her nod to Monty Python – Nobody expects the Inquisition.

Despite the setting I still enjoyed this one, maybe just not as much as the Three Pines books. If you’re going to read them be sure that you start at the beginning, reading them all in order to get the most from them.

6 thoughts on “The Beautiful Mystery by Louise Penny”