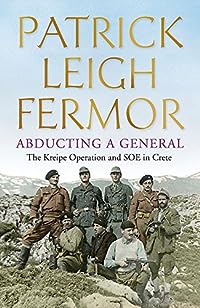 Fermor’s book is more of a straightforward account of what went on during the operation. The book also includes his intelligence reports.

There’s no doubt that the whole operation to kidnap a German general was fraught with danger, you could say it was absolutely crazy. This book tells how lots of Cretans put their lives in danger and Fermor was full of praise for them. Crete had been invaded by the Nazis and the Cretans were obviously on the side of anyone who could help get rid of them.

I couldn’t help thinking though that Fermor et al were completely naive in thinking that the Nazis would not take their fury over their abducted general out on the local villages. They left plenty of evidence about that it was a British force which had kidnapped General Kreipe, such as a British army overcoat and a Cadbury’s chocolate wrapper. However the Germans at first believed that the kidnap must have been performed by rogue elements within their own forces. Every soldier who had a poor discipline report was rounded up and in the end 30 German soldiers were shot. Eventually it was the surrounding villages which were razed to the ground and lots of Cretans bore the brunt of the Nazi fury.

The whole thing seems to have been one of those wizard wheezes dreamt up by some chap who was safely flying a desk back in the UK. It was something that army types often did to justify their existence I suppose. It’s that definition of war as : ‘five years of utter boredom interrupted by 10 minutes of sheer terror.’ Like something out of a Boy’s Big Adventure Book and I think that those taking part in it could only hope that there was a good outcome which would make it all worthwhile.

General Kreipe was eventually picked up off Crete by the British, but I doubt if they got much information from him that they didn’t already know.

Much is made of the fact that the general was uncomplaining despite having to climb up mountains and starving along with his abductors, but I suspect that General Kreipe must have thought that Christmas had come early as by that time things were going very badly for the Germans. The upshot seems to have been that because Kreipe was a prisoner of war in Canada first and then Wales, he was well out of it and avoided standing trial for war crimes, unlike two other Nazi generals who were on Crete.

I spotted this book in the library and borrowed it as I had really enjoyed Fermor’s pre war travel books which made you feel like you were travelling along with him, and he was a great friend of Deborah Devonshire (Mitford) inevitably. His travel books are still my favourites.

3 thoughts on “Abducting a General by Patrick Leigh Fermor”