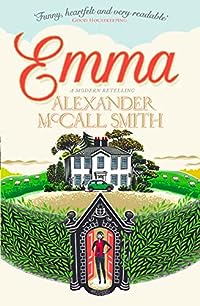 I’m really not all that keen on the idea of Jane Austen’s books being rewritten by famous contemporary authors, so I don’t really know why I decided to borrow this one Emma by Alexander McCall Smith which was published in 2014.

Actually I ended up quite enjoying it. It’s yonks since I read the original Emma, but I think that McCall Smith goes into more detail over some of the characters’ backgrounds, unnecessarily really, but otherwise it was fine.

Emma Woodhouse is of course being brought up by her father as her mother is dead. Mr Woodhouse was born during the Cuban Missile Crisis, a time when everyone was half expecting to be going up in a big nuclear bang. The stress of it all has affected his mother and she transferred her stress to her baby, which explains Mr Woodhouse’s extreme fear and stress over just about every aspect of life.

As Emma grows up he employs a Scottish governess for her. Miss Taylor comes from Edinburgh and is a typical Presbyterian, all conscience and hard work ethic. This gives the author a chance to delve into the philosophical, moral and ethical questions that he so much enjoys writing about, but those passages can sometimes fall with a clunk into the book.

I gave this one three stars on Goodreads. I see that there were six authors who were doing these rewrites, one of them was Val McDermid who rewrote Northanger Abbey and is one of the more successful ones. I think I’ll give that one a go sometimes. Have any of you read any of the others?