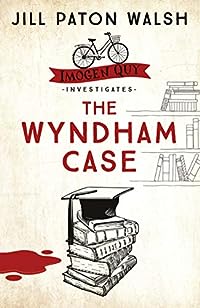 The Wyndham Case by Jill Paton Walsh was published in 1993. The only other books which I had read by this author were a Dorothy L. Sayers book which had been unfinished when Sayers died, which Walsh finished off, and a book in which she used the Sayers’ characters. This book is the first in a series featuring Imogen Quy – to rhyme with why.

The Wyndham Case has very much the same sort of feel, although updated. The setting is St Agatha’s College Cambridge, a place of petty rivalries between librarians and snobbery and bullying amongst the students.

Imogen Quy is the St Agatha’s College nurse and by the second page she was being sought out by the College Master – Sir William Buckmote, a tragedy has occurred. That was a big plus for me as I’m not keen on crime novels where the murder doesn’t occur until half-way through the book.

One of the students has been found dead in the Wyndham library, his head in a pool of blood. Is it murder or merely a tragic accident?

The deceased student happens to have been one of the few who come from a non fee-paying school, in fact he came from a grammar school and as such was suspect by the other students who looked down on him. Even worse as far as they were concerned – he actually wanted to learn things, whereas the wealthy students were more into partying.

Imogen Quy suspects foul play, but she’s the only one who does and there’s another murder before her fears are taken seriously.

This book was a sort of cross between a Dorothy L Sayers book and an Inspector Morse one, because of the supposedly superior college setting. I must admit it took me a wee while to get into it, despite the speedy murder. I found the dialogue to be awkward at the beginning but I ended up enjoying it and for me the twists and turns were unexpected. I will read more in the series at some point in the future.

4 thoughts on “The Wyndham Case by Jill Paton Walsh”