I’ve had Oblomov by Ivan Goncharov sitting on a shelf for over 20 years (maybe even 30) and when I bought it I hadn’t even heard of the book before. I freely admit I was drawn to the book by its binding, so I was pleased to read fairly recently that Oblomov is a book that is well thought of by others, so I was quite chuffed when I got it in this spin. 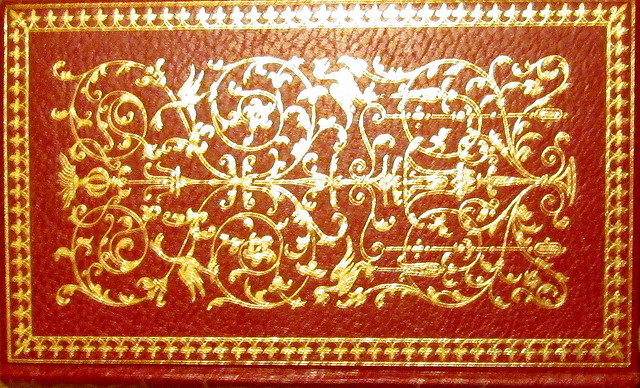 I can’t say I absolutely adored it but I did really like the book.

Oblomov is a likeable character, in fact there isn’t a bad boen in his body. As a young man who got a position in a government office when he left his home in the country he had the usual ambitions of hoping that it would lead to better things, but he quickly became disillusioned by the work and more or less took to his bed. He has classic signs of depression and even after he inherits the family country estate he just can’t get up the energy required to sort out the problems of running it. He has great intentions of building roads and bridges there, repairing houses and building a school for his peasants’ children. He lies in bed day dreaming of everything he will do there, but when it comes to it he can’t get up the energy required to get up and get dressed.

When Oblomov falls in love with a beautiful young girl he can hardly believe that she is interested in him, she rouses him out of his langour, he must get out and about to meet her. Despite being besotted by her Oblomov worries that he isn’t cut out for marriage, passion means expending energy and he has his doubts that he can manage much of that.

Oblomov is a kind and easy-going soul and he puts up with people that others wouldn’t give the time of day. This leads to him being targetted by a ghastly sponger who goes to Oblomov’s apartment to eat his food and drink his wine, even ‘borrowing’ his clothes and money, neither of which are ever seen again of course. Money from his estate is sent to Oblomov but he is so feckless that it disappears in no time, either given away or pilfered by servants.

His kind nature ends up in him being abused financially which leads to him having to move to a poor area of the city where he becomes the lodger of relatives of the sponger and they set about bleeding him dry of money.

Meanwhile Sophie has come to realise that Oblomov is never going to shake himself out of his torpor for long enough to be a decent husband and part of Oblomov is relieved as he prefers to spend his time just sleeping and eating anyway. His landlady is a wonderful cook and as we all know – the way to a man’s heart is through his stomach, so he had been getting very attached to her.

Things take a turn for the worse when his landlady’s brother blackmails Oblomov, saying he has damaged his sister’s reputation and this ends up with the brother and the sponger being in control of Oblomov’s estate.

The cavalry rides in in the shape of Oblomov’s German childhood friend who realises what has been going on and sorts the whole mess out.

2 thoughts on “The Classics Club Spin – Oblomov by Ivan Goncharov”