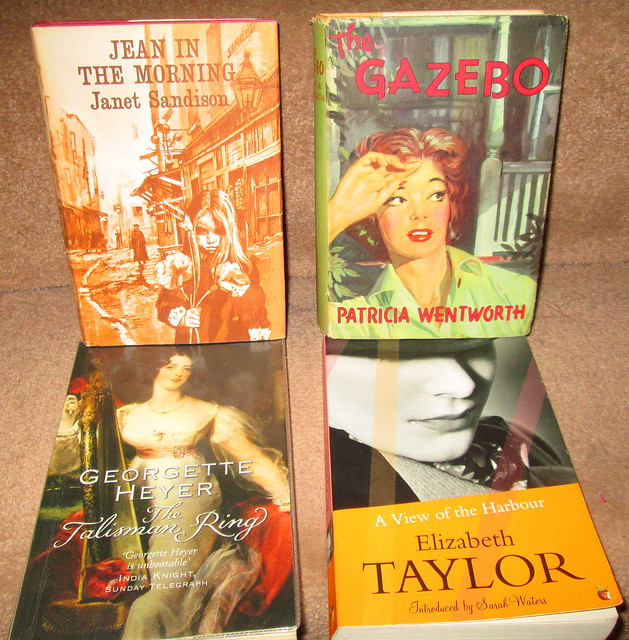 Above is a photo of more book purchases made a few weeks ago.

1. Jean in the Morning by Janet Sandison will count towards the Read Scotland 2016 Challenge. She also wrote under the name Jane Duncan.

2. The Gazebo by Patricia Wentworth still has its original dust jacket but I would have bought it even if it had just been a paperback.

3. The Talisman Ring by Georgette Heyer. I think I have at least four books of hers unread at the moment, but I’ll get around to them eventually.

4. A View of the Harbour by Elizabeth Taylor. It’s a Virago reprint. Why oh why did they change from their original dark green covers?

At the moment I’m sitting in heat in Holland. It is usually around 16 C / 61 F at this time of the year but we’re having a heat wave, particularly unusual as the schools here have been off all week for the Ascension Day holidays. In the UK any sort of ‘bank’ holiday usually guarantees awful weather.

I see from the TV weather forecast that Blighty is sitting under a big grey cloud so we’ll certainly feel the difference when we get back home, or maybe we’ll be lucky and the good weather will have reached the UK by then. Whatever – we feel that we’ve already had more sunshine than we’ve had all summer – in some recent years.