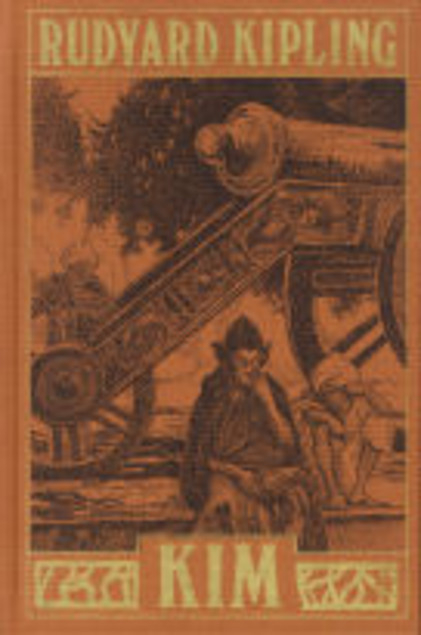 I was in a St Andrews bookshop a few months ago when an American chap was buying an ancient set of Rudyard Kipling books and praising Kipling ‘to the skies’. Well, I had only read the Just So Stories, Puck of Pook’s Hill and Rewards and Fairies – way back in nineteen canteen – as my mother used to say for some reason.

So I thought that maybe I was missing something and it was about time I got into Kipling, I have a lovely Folio Books copy of Kim so when I realised that Kafka’s The Castle was not going to be good bedtime reading I decided to givew Kim a go. Unfortunately I soon discovered that Kim and the Castle actually have quite a lot in common. They’re both basically about a quest.

Kim is a young orphaned boy. His father was an Irishman in the British Army and his mother was also white so despite the fact that he has been living as an Indian and speaks English with an Indian lilt, he is in fact a ‘sahib’. He forms a relationship with a wandering holy man from Nepal who is searching for a special river. Kim becomes the holy man’s disciple and helps him with begging for food as they continue on their travels.

But Kim is also looking for something, he had a vision of a red bull and knows that it has a special meaning for him, so he is searching for it. When he finds the red bull on a flag flying in a British Army camp he discovers that his father had been an Irish soldier and when the officers realise that Kim has been living as a native they decide that he must go to school to be trained up possibly as a surveyor.

After three years at school during which time the lama travels around on his own, eventually the two are able to continue their travels again.

I read on to the end but I can’t say that I found Kim to be an entertaining or even informative read, but as always when I read a disappointing classic I’m quite glad that I did read it and now know what it’s about.

I read this for the Classics Club Challenge.

8 thoughts on “Kim by Rudyard Kipling”