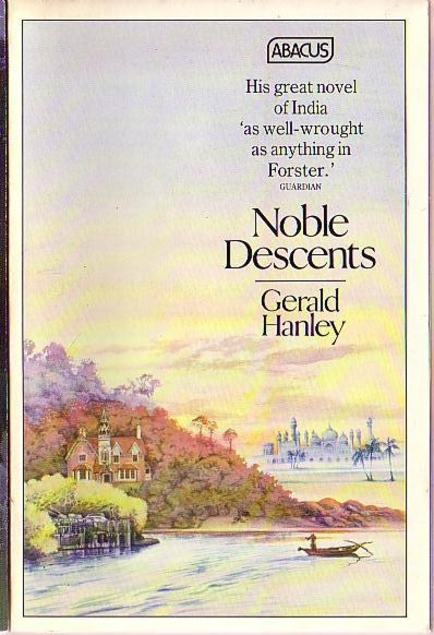 Recently I read Kipling’s Kim with its colonial India setting, I have to say that I didn’t enjoy it that much, but just a couple of weeks later I picked up Noble Descents by Gerald Hanley which has a post Indian independence setting. I enjoyed that one far more than Kim.

In Noble Descents the characters have chosen to ‘stay on’ in India after independence. Of course for many of the so-called British people India was really their home as they had never even visited England and their family had been in India for generations.

Others had come out from Britain where the jobs they could get were rather low in status and poorly paid. The prospect of living in India where they could afford to have ten servants to shout at was what drew them to India.

Colonel Tim Bingham is one of those ‘staying on’, he’s retired from the army and has always had an affinity with India and an interest in the culture and religions. His closest friend is a Maharajah who feels he doesn’t fit in at all in his own country. He has been educated at an English public school and that culture is the one that he is most comfortable with. After the death of his wife and child the Maharajah feels even less inclined to be what he has been brought up to be.

This is a very readable and at times witty tale involving poisonous marriages and poison pen letters and people from Hollywood intent on making a film.

I found it quite amusing that there are a few characters in it who are making a lot of money from the books they are writing – a very unusual happening in the publishing world and probably wishful thinking by the author.

I was pleased to see my favourite perfume Ma Griffe mentioned a few times – that exquisite perfume as it was described, one character tries to get his boring wife to wear Ma Griffe – but she obviously just wasn’t classy enough!

India isn’t a favourite destination of mine book-wise but this book had made me think that I might read some more, maybe some of Paul Scott’s books would fit the bill. Have any of you read any of his books?