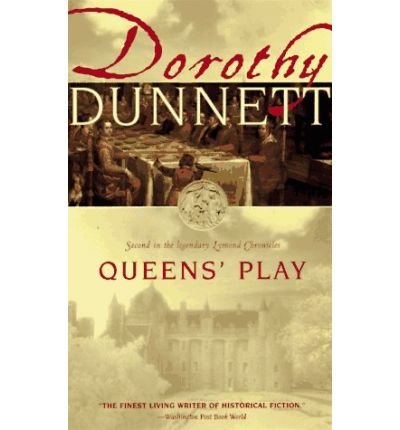 I actually read Queens’ Play a wee while ago, but I have such a backlog of book reviews to catch up with, mainly because of not blogging while we were on holiday. I use this blog to keep track and remind myself of books that I’ve read though, so here goes.

Queens’ Play which was first published in 1964 is the second in Dorothy Dunnett’s Lymond Chronicles and as I recall, I enjoyed it even more than the first one. These books aren’t really suitable for bedtime reading – well not for me anyway because they require more concentration than I can usually summon up by then.

In Queens’ Play Francis Crawford – more commonly known as Lymond is in France at the court of the seven year old Mary Queen of Scots. He has been invited there by her mother, Mary of Guise who thinks that her daughter is at risk of assassination, with good reason no doubt. The young Mary was sent from Scotland to France as a five year old, but that might have been a case of jumping from the frying pan to the fire.

As France and Scotland shared an enemy in England it was hoped that the young Mary and the young French Dauphin would eventually strengthen the alliance through a marriage. But those in power in England were obviously against that alliance. It was Lymond’s job to seek out intrigues and to protect Mary from them.

“(Her) hero is as polished and perceptive as Lord Peter Wimsey and as resourceful as James Bond.”