After yesterday’s blogpost about Clark’s and Coats artificial silk thread, I was surprised that some people didn’t realise that those very successful companies had begun in Paisley in the west of Scotland. Paton’s and Baldwin’s wool and Anchor embroidery thread also hailed from Scotland, but I’m not sure if those companies became well know outside Britain. Like so many other things the manufacturing seems to have been moved abroad in recent years to cut costs.

Anyway, I used to collect Mauchline Ware, another Scottish invention, if you can call it that. Originally they were mainly small boxes made from good quality boxwood. These were produced for tourists so they have a huge variety of places printed on them, many castles of course and big houses, sometimes a view of a whole town or a bridge. With the coming of trains and the consequent opening up of the country, people were able to travel around as they never had before and they wanted to take a souvenir home as a reminder of their travels. 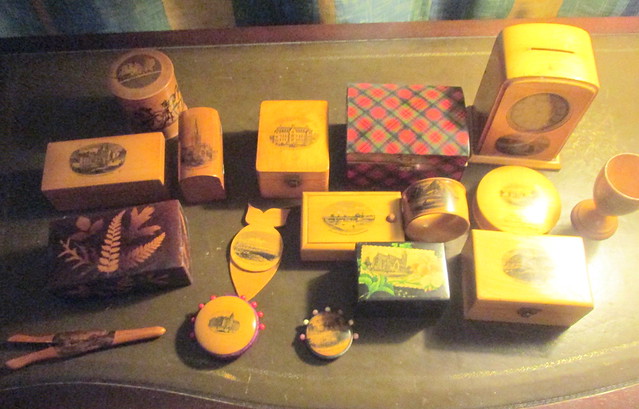 The manufacturers often decorated their wares with tartan paper, the boxes have several layers of varnish on them to protect them. When ferns became wildly popular in Victorian times they were used to decorate the goods. Of course Victoria and Albert started the craze for all things tartan and when Albert died Victoria went into mourning forever more and I think that is when Mauchline ware began to appear in black.

Originally made in the small Ayrshire town of Mauchline in the 1820s, other places in that area got in on the action, but the last of Mauchline ware was made in 1933. By then they had expanded their repertoire and made all sorts as you can see. Sewing things were popular – pin cushions, needle cases, thimble cases and crochet hook cylinders. Glove stretchers, egg cups, money boxes, napkin rings, glove boxes, watch stands, rulers, page turners, whisky glass cases – you name it and they made it.

As so many sewing related articles were made adverts for Clark’s thread and similar things began to be inserted inside the boxes, as you can see from the photo below. 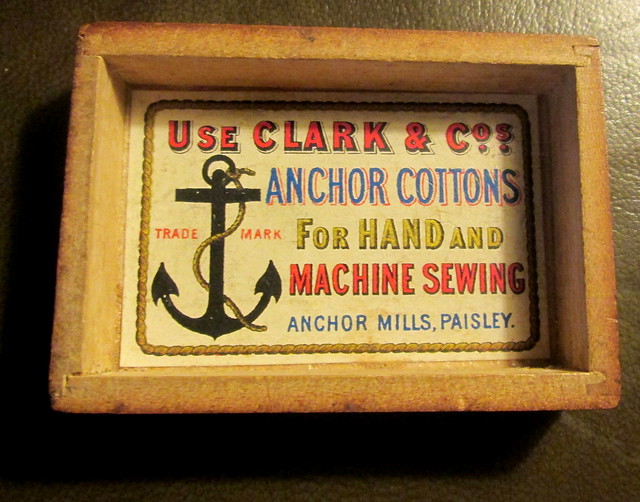 A huge fire at the last Mauchline ware manufacturers in 1936 put an end to the production, but so much of it was made that it’s easy to find at any antiques fair and sometimes charity shops.

They also put foreign tourist spots on their wares – such as Bunker Hill and the Champs-Élysées and sent them abroad for sale in America and France. Germany nicked the idea and made similar objects but these are easy to recognise as the quality is so poor compared with Mauchline ware. The German wood is pine and much rougher looking and the scenes depicted aren’t nearly so well defined.

You can see more images of Mauchline Ware here.