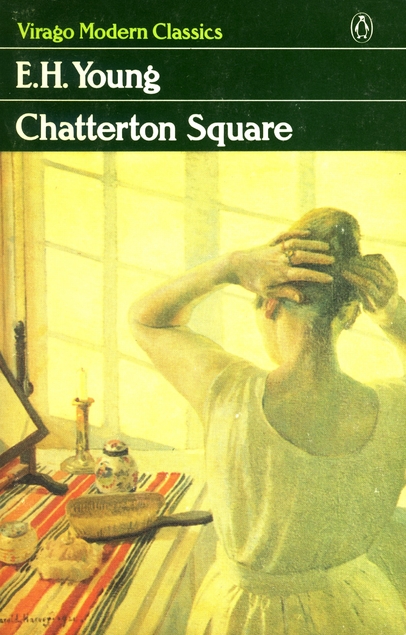 My copy of Chatterton Square by E.H. Young is a Virago reprint from 1987 and I’m ashamed to admit that I’ve had it sitting on a shelf all those years unread. It was the Undervalued British Women Novelists Facebook Group that I’m a member of that spurred me on to dust it off and read it at last, and I’m so glad that I did. It was my first book by E.H. Young and I loved it, it’s the last book that she wrote and is possibly her best one, subsequently I’ve read her Miss Mole and I didn’t enjoy that one quite as much.

Chatterton Square is set in Upper Radstowe, (Bristol) it’s an area that’s slightly past its best but not quite down at heel. The Fraser family is a large one and their house in the square is owned by Rosamund Fraser, it had been built by her grandfather and she has always lived there. Her husband Fergus has abandoned her and his family and is thought to be living somewhere in France. His absence is a bit of a relief all round as his rages and bad behaviour in general had upset everyone. Miss Spanner, an old family friend has moved into the house since his departure.

A house across the road has been rented by the Blackett family. Mr Blackett has been born thirty or forty years too late, he’s really a Victorian and tries to control everything, even down to the rather antiquated clothes that his wife wears. He has an enormous ego and thinks that he’s admired by all women. In fact he isn’t even admired by his wife, she had married him as a means of escape from her even more forbidding father, and her honeymoon in Florence had been a ghastly shock to her, something she had never really got over. The fact that her eldest daughter was conceived then and named Florence ensures that she has a constant reminder of it.

The two families begin to fraternise, something that Mr Blackett isn’t very happy about.

Unfortunately for Bertha Blackett her husband is quite besotted by Rosamunde although he claims to dislike her, he is I think annoyed by her ‘hold’ over him despite the fact that Rosamunde barely looks in his direction. Bertha ends up being the recipient of his lust, although that’s all very delicately dealt with. He insist on jamming their double bed up against a wall, meaning that Bertha is stuck between him and the wall, having to clamber over him to get out! Bertha knows her husband inside out but he is absolutely clueless about her character and wishes, she’s just an extension of him as far as he is concerned. He’s shocked when he discovers that she has been reading a different newspaper from him while he’s at work. He’s a bear of very little brain.

There’s so much to say about this book, but I’m just giving a wee flavour of it here, it’s set just as Chamberlain is doing all that toing and froing between Berlin and London in an attempt to avert World War 2. The possibility of war hangs over the whole book with Blackett absolutely sure that there won’t be another war (he had dodged the last one). The spectre of World War 1 follows all the older characters.

Everybody else is quite sure there will be war, particularly the ones who had been in the first war. World War 1 hangs over everything I think, Fergus has almost certainly been damaged by his experiences in that war, hence his moods and rages, things that Rosamunde had probably not bargained for when they were first married. Despite everything Rosamunde is an optimistic woman, which is just as well.

The women are by far the more important characters, the men shadowy compared with them and I love the way Bertha Blackett deals with her obnoxious husband, she’s so much brighter than he is.

Miss Spanner seems to be a favourite type of character with E.H. Young. She’s similar to Miss Mole in many ways and both characters have a habit of ‘knocking’ or pushing their noses at times of distress. I note also that another of Young’s books is titled The Misses Mallett – Young seemed to have been fond of naming spinsters after tools!

Chatterton Square has an afterword by Bel Mooney. I intend to read all of Young’s books eventually.