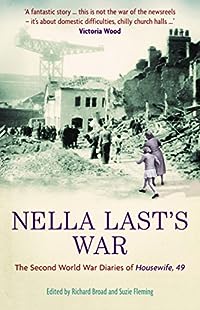 Nella Last’s War – The Second World War Diaries of Houswife, 49 is a great read, I loved it and the author Nella Last. Nella was one of the many people who had signed up to be part of a Mass Observation project which was started in 1937 by a social research organisation. Her wartime diaries are full of interest and lovely writing. Nella would have liked to have been a writer of books, presumably novels, she could certainly write and her diaries are a window into the life of an ordinary woman.

Nella had suffered from ill health before the war and had even had operations, although she didn’t specify what sort, but it seems that her illnesses must have been stress related and almost certainly caused by the narrow life that she led. Her home was her whole world and her husband, a self-employed joiner, was an old-fashioned man who felt he had to be in control, despite the fact that he was less than dynamic. Poor Nella must have had a life of watching him make the wrong decisions time and time again and she had to cope with the consequent fall-out, particularly a lack of money.

So it’s just as well that Nella was such a good manager – give her five tins of sardines and a few loaves and she could have fed the five thousand – AND had some left over for tomorrow’s lunch! Not that her husband was impressed, he took her completely for granted. Half-way through the book I thought that their relationship was improving, but it didn’t last for long.

Nella’s mental and physical health improved vastly when she started doing voluntary work for the war effort. This was the first time she had ever set forth to do anything without her husband William, and with two sons she had never had many females in her life, she lacked a woman friend and the companionship that she found in the three jobs that she took on must have given her a big boost, even although some of the other women were of the awkward variety.

Nella had a great affinity with her animals, cat, dog and chickens and knowing this her doctor entrusted her with the life of a tiny premature baby – until the mother was well enough to look after it herself. I’m aware that as she is writing all this herself then you might think that this is just a woman who enjoys blowing her own trumpet a lot but she doesn’t come across as that sort of person at all.

There were a couple of things that I didn’t agree with her about – she mentioned that it was in the newspapers that Hitler had euthanised (murdered) a lot of Germans who had been regarded as being mentally defective and that was one thing that she agreed with Hitler about as she didn’t see any point in such people being a drain on society – words to that effect anyway. But of course Nella would not have realised that many of the people who Hitler had had ‘put down’ had suffered from similar problems that she had had pre-war, people who suffered from depression or had had a nervous breakdown were murdered in that barbarism.

Nella also ‘laid into’ her husband when he was afraid for their soldier son’s life, something that I thought was completely natural.

I could write a lot more about this book but as almost everybody seems to have got to it long before I did I’ll leave it at that. Luckily I already have her peace time diaries to read.

I enjoyed watching Victoria Wood in Housewife, 49 but now that I’ve read the book I feel that Wood portrayed Nella quite differently, as I recall Nella seemed quite pathetic at times, and I don’t think she ever was.