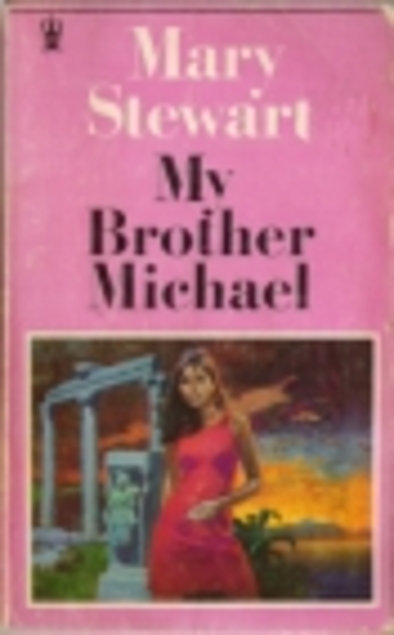 My Brother Michael by Mary Stewart was first published in 1959 – a very good year I think! But my paperback copy is from 1971.

The story begins with Camilla Haven sitting in a crowded cafe in Greece where she’s on holiday on her own after the break up of a long term relationship, She’s writing a letter to her friend back in the UK and bemoaning the fact that nothing exciting ever happens to her, no sooner has she written that when a man throws car keys onto her table and says that the car he has ordered is waiting for her. There’s been some sort of mix up as she hasn’t asked for a car but eventually Camilla decides to take the car and drive it to Delphi, it’s apparently a life or death situation that the car is delivered there and she had been planning on visiting Delphi anyway.

There she meets Simon who is a Classics teacher back in England and Simon is on a mission to visit his brother’s grave and to discover more about his death. Michael had been in the British army and involved with the Greek resistance fighters during World War 2 – a terrible time for the Greeks as the Nazis treated them so badly, but to make matters worse the various factions of Greek freedom fighters fought amongst themselves, so it was difficult to know who to trust. As the story unfolds it transpires that Camilla also finds it difficult to know who is on her side.

I really enjoyed this one, Mary Stewart was obviously very fond of Greece and the Greeks, as I recall she used it as a setting a few times. There’s plenty of suspense in this one and I can’t help thinking that Mary Stewart would have had a far higher profile and reputation if she had been a male author.

4 thoughts on “My Brother Michael by Mary Stewart”