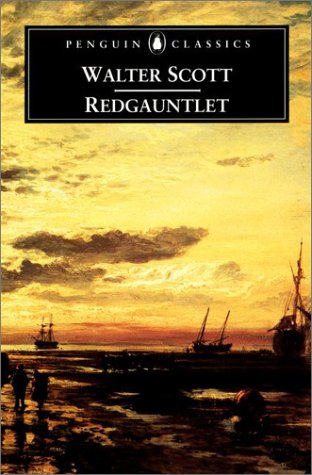 Redgauntlet by Sir Walter Scott was first published in 1824. I’ve wanted to read this one for ages, but I can’t say that it is one of my favourites. Scott is of course very wordy, and I usually get used to that very quickly, but this one seemed like an awful long road to reach what the author wanted to say which was that the Jacobite cause was well and truly over and the Hanoverian King George sitting in London had no need to fear any other Jacobite rebellions. Scott was actually very much involved with the British royal family, he masterminded George IV’s visit to Edinburgh in 1822 and even designed the clothes that he wore for it. Yes we have Scott to blame for all that tartanry and fol-de-rol lace and velvet, although thankfully nobody has been keen to emulate that king completely as George IV insisted on wearing pink tights with his kilt!

Anyway, back to the book – young Darsie Latimer is a bit of a harum scarum and while on an adventure on the Solway Firth close to the English border he ends up getting kidnapped by Redgauntlet. His good friend Alan Fairford hears about this and decides to ride to his aid, despite the fact that he is in the middle of his first court case as a lawyer.

Darsie had no idea who his parents were but it turns out that the Border laird Redgauntlet himself is related to Darsie and Redgauntlet has been busy trying to gather together some people that he thinks might be interested in taking part in another Jacobite rebellion. He tells Darsie exactly who he is, and that his father had been executed for his involvement in the 1745 rebellion. Darsie isn’t interested in joining the cause, not even when he knows that Charles Edward Stewart is there. There’s a bit of romance in there as you would expect, and a man dressed up as a woman to avoid detection, a standard Jacobite rouse!

My favourite Scott novel is still The Pirate.