Wherever we travel I’m always keen to see the sorts of houses that the locals live in and I have to say that I love the wooden houses in Norway, I think they’re almost all mainly made from wood. The one in the photo below has a turf roof, if they painted the wood green I think it would be difficult to find amongst those trees. 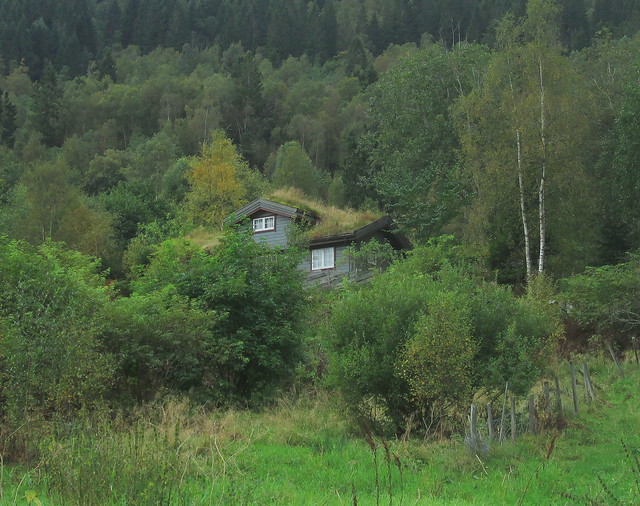 Until very recently I’ve rather looked down on wooden houses as opposed to those made from stone, probably because of that children’s story The Three Little Pigs – wooden houses never seemed that safe to me for various reasons and not just the possibility of fire. I love the one in the photo below, which I believe (if my memory is behaving itself) is in Olden in Norway, as are the others. 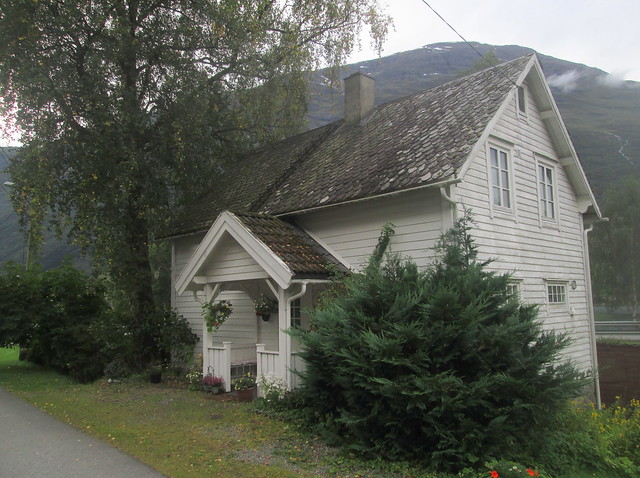 The same house, different angle, I wouldn’t be at all happy about that big tree being so close to it though. A lot of the houses in Norway have narrow permanent ladders on their roof leading to the chimney. An aid for Santa maybe! 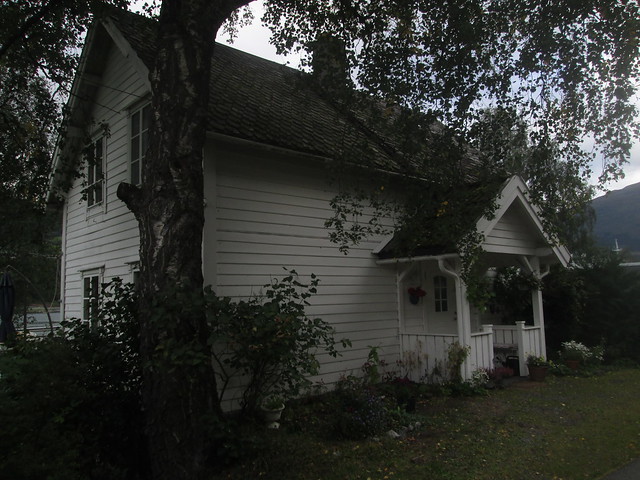 When I thought about it I realised that the wood is a far better insulator than stone is, especially as in Norway they seem to have more than just an outer skin of wood, certainly at least two layers. They’ll actually be far easier to heat than stone or brick houses as when they get the cold air on them they become ice boxes and are impossible to heat up with modern central heating. Coal fires are needed to heat up the walls through the flues, but coal is too expensive and polluting now.

If you look to the right in the photo below you can just make out a flagpole and flag. This is quite rare in Norway, even rarer in Scotland mind you. In Norway they have very strict rules on who and when you can fly the flag. Only high up officials working for the government can fly it, unless it’s their national day and then anyone can fly the flag. I think that’s sensible, there’s something rather unbalanced about enthusiastic flag fliers – and constant national anthems too for that matter. 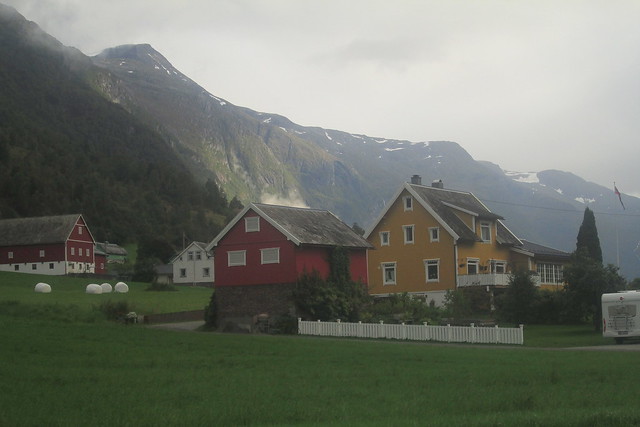 The more modern houses are just as nice I think and this one below has a particularly colourful and well kept garden. 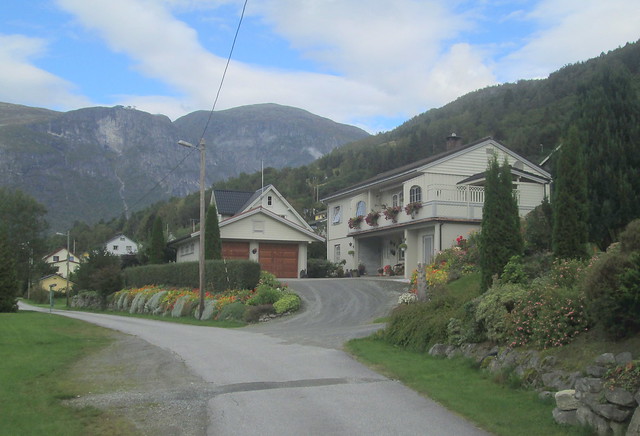 Back to old houses and the smaller buildings seem to have been built on stone pillars, I think they were probably grain stores or barns and that would have been a way of keeping vermin out. 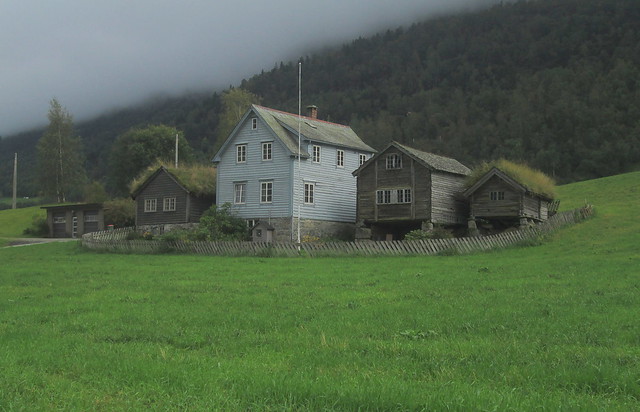 It occurred to me that when the Scandinavians immigrated to the USA as many of them did in the 1800s – they took their way of building homes with them. So what I thought of as being an American house style was really originally Scandinavian it would seem. The yellow wooden house below really stands out but I couldn’t believe how close that massive beech tree is, it must make it very dark inside – upstairs anyway. I’d be terrified of it falling on the house in a high wind, although the captain said that Norway doesn’t get much in the way of high winds, which seems strange to me. 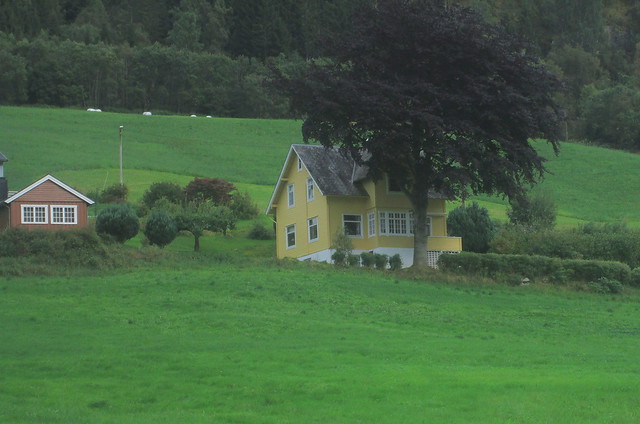 I like all these homes and would be quite happy to move into any of them. Interestingly they only use electricity for heating in Norway. They do have natural gas but they export it all. Although things in Norway are expensive in general necessities such as power and housing costs are reasonable and that’s really the way it should be I think. Of course they have lots of hydro-electric power, they’re way ahead of us with renewables, but in Scotland we’re catching up. 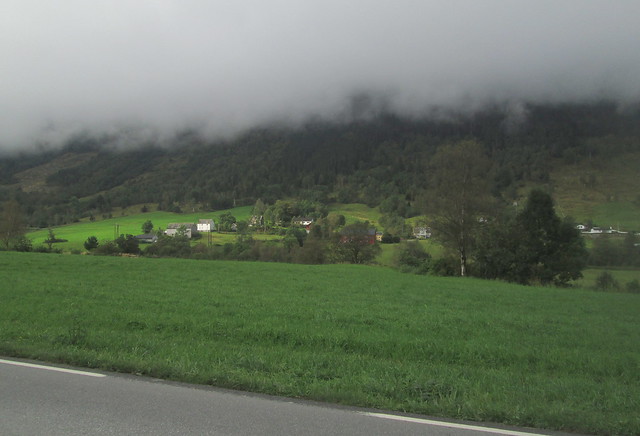