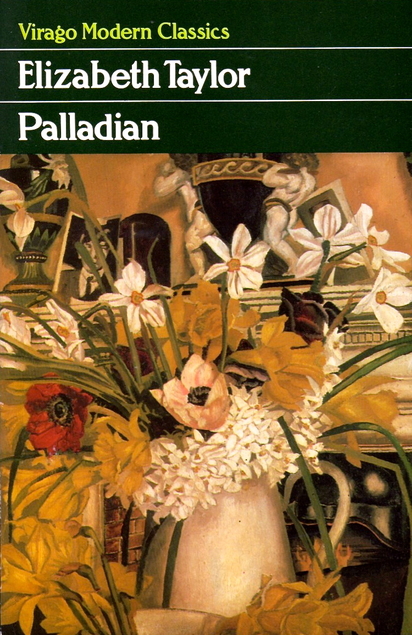 Palladian by Elizabeth Taylor was first published in 1946 but my copy is a Virago reprint. I have to say that although I enjoyed the book it isn’t up there amongst my favourites. It’s a bit of an homage to Jane Eyre and Jane Austen, a slightly updated Gothic tale and so is quite predictable. There’s even a character who is obviously based on Branwell Bronte. Having said that there is some lovely and humorous writing and well observed characters that you can’t help thinking are so real – they must have been based on someone she knew. There also seems to be a lot of product placement, long before such things occurred surely. Sanatogen, Bengers, Ryvita and more – bizarre, I can’t imagine the author was paid for the mentions.

Cassandra Dashwood’s father has died, she’s now on her own and homeless. She visits her old school and her headmistress arranges for Cassandra to become a governess at Cropthorne Manor which turns out to be everything Cassandra wants – a crumbling, mouldy pile of a house. She has already decided that she will fall in love with her employer Mr Marion Vanbrugh. Yes he IS a man, I believe that was John Wayne’s real name.

The blurb on the back says: Just as Jane Austen wittily contrasted real life with a girl’s Gothic fantasies in Northanger Abbey, so Elizabeth Taylor examines the realities of life for a latter-day Jane Eyre in this sharply observed work.

This is Taylor’s second book to be published, and they always say that it’s the second one that they find most difficult to write, I think it tells in this book. I’d give it a 3.5 on Goodreads – if I could.

2 thoughts on “Palladian by Elizabeth Taylor”