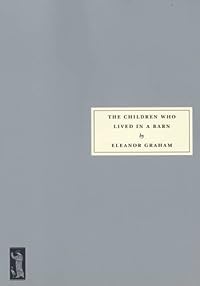 The Children Who Lived in a Barn by Eleanor Graham was first published in 1938. My copy is a Persephone reprint. The author is probably better known as an editor for Puffin and Penguin books, and as such she obviously knew better than anyone that the best way to write a book for and involving children is to get rid of the parents as fast as possible, which she duly does in this book.

The Dunnet family consists of the parents and five children who range in age from thirteen to seven. Susan is the eldest and luckily she’s a very level-headed and competent girl, she has to be because their rather feckless parents take off for Switzerland where Mrs Dunnett’s mother has taken ill. They’re completely confident that Susan can look after everyone until they get back, but they don’t return and even worse the children are evicted from the family home as the landlord wants the house.

The villagers are mainly helpful and a farmer offers them the use of an old barn to live in. They set to work making it habitable and as the summer approaches they make a decent job of looking after themselves although the bulk of the work has fallen on Susan who has to learn how to wash and sew. She’s at her wits’ end trying to make ends meet.

Susan has become a little mother figure with help from a local teacher, the baker and some others, but the local district visitor is determined to get them all put into a ‘Home’ for orphans. She’s a thoroughly despicable character, but to be fair nowadays there is no way that ‘home alone’ children would be allowed to look after themselves, they’d all be taken into local authority ‘care’ immediately.

This is a charming story even although the reader has to suspend disbelief, not only when the children are allowed to stay in the barn, but also the reason why the parents haven’t returned is fairly pathetic and totally unlikely. It’s well written otherwise although I have to say that it always annoys me when the youngest girl in a family is portrayed as spoiled and whining as is Alice in this book – such nonsense as I should know!

There’s a preface by the author Jacqueline Wilson in which she explains that when she was growing up it was normal for children to be given a latch key and to be by themselves at home – until their mother got home from work. All quite true, there were millions of us growing up like that, really bringing ourselves up, I don’t know when it was decided that children had to be chaperoned all the time, possibly around the late 1970s.

I’m fairly sure I didn’t read this one when I was wee, I think I would definitely have remembered it as it would have been right up my street. Have you read it?

This one is on my Classics Club list – another one bites the dust.

The endpapers are taken from a 1938 screen printed design by John Little.