I love ships and there’s something special about lovely old wooden sailing ships and all that rigging, but I can’t imagine ever being brave enough to actually set sail in one – on a long journey anyway. Those chaps who sailed off to explore the Antarctic were incredible. The Royal Research Ship Discovery was launched in 1901. 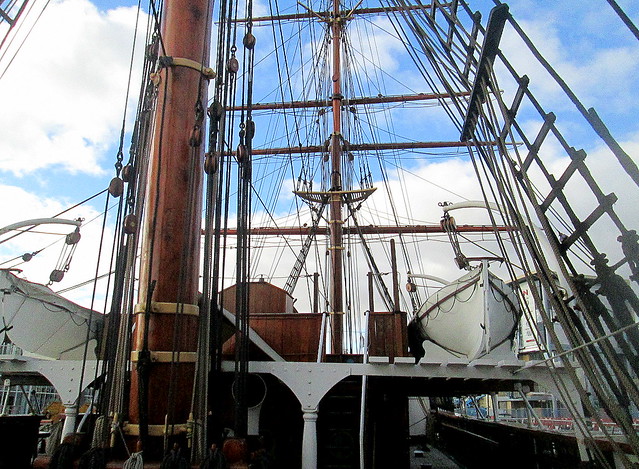 Going aboard Discovery the first thing that you notice is the mushroom vents which are fitted on the decks, they’re the equivalent of skylights in a house roof and bring daylight and fresh air below decks, but they’re chunky (well they had to be) and they’re terrible obstacles for anyone getting about on deck, in fact they were nick-named ankle grinders by the crew. There are no portholes in the ship’s hull as they would have weakened the structure. 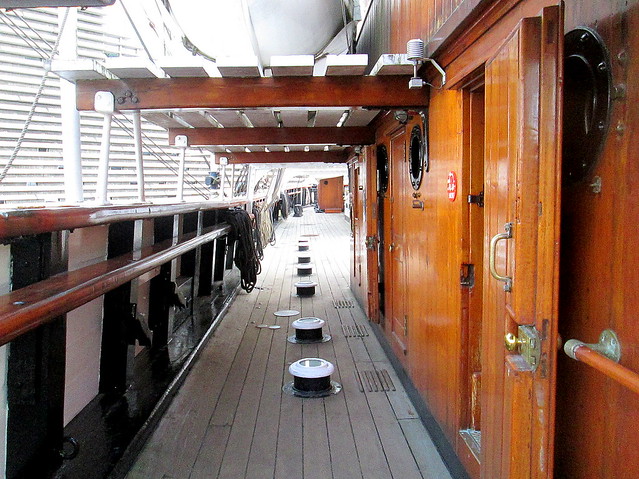 Going down into the hold I was surprised at how small it feels, considering they had to take so much with them in the way of stores. 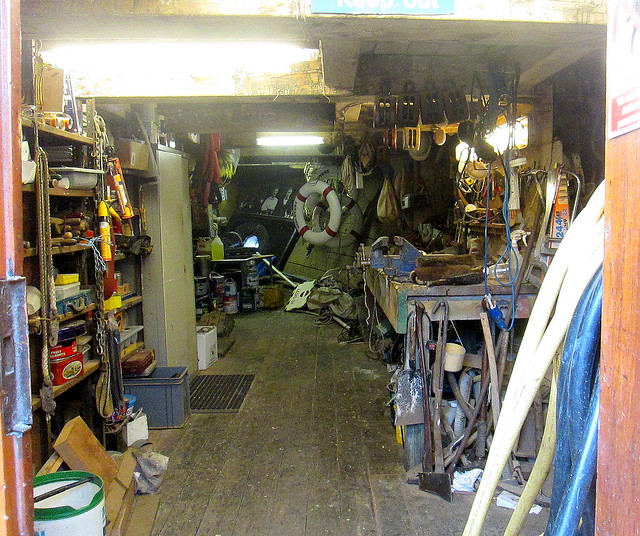 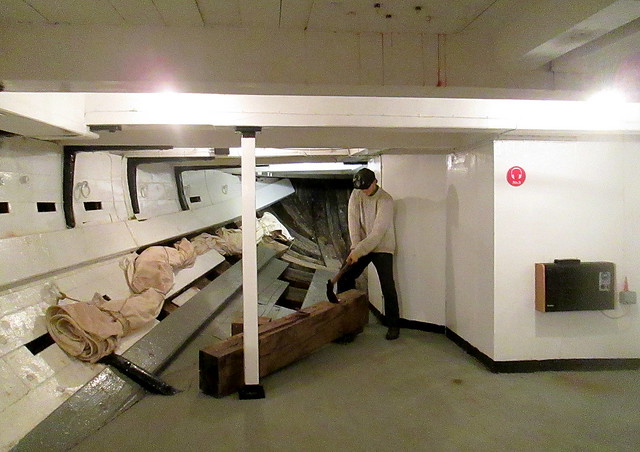 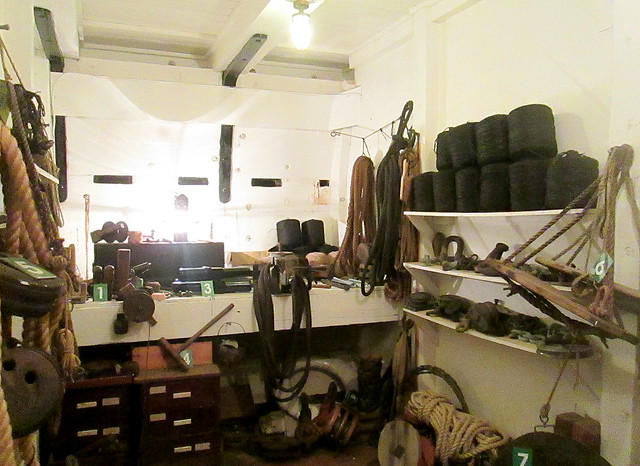 The actual living accommodation is quite stylish in an Edwardian sort of a way, with lovely wooden panelling, a bit gentlemen’s club-ish. It was a time when people knew their place in society though so although the officers had really comfortable looking cabins, complete with hanging bookshelves and a dining room the accommodation for the ‘men’ was basic. They just had hammocks slung up in the mess room, eating, sleeping and relaxing (if they ever could) in the same place. 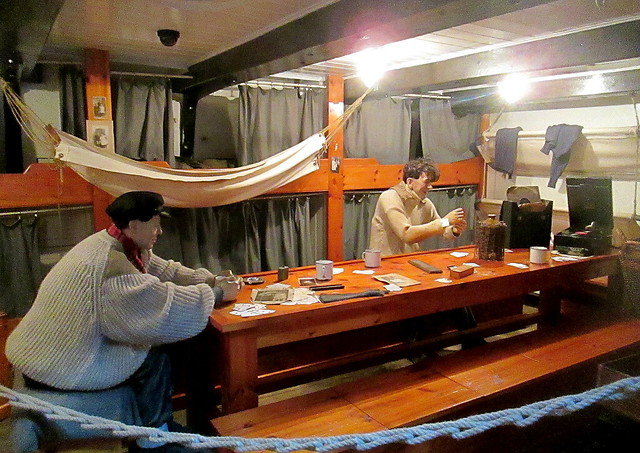 The officers’ wardroom is in the middle of the ship with the officers’ cabins situated just off the room as you can see in the photo below. 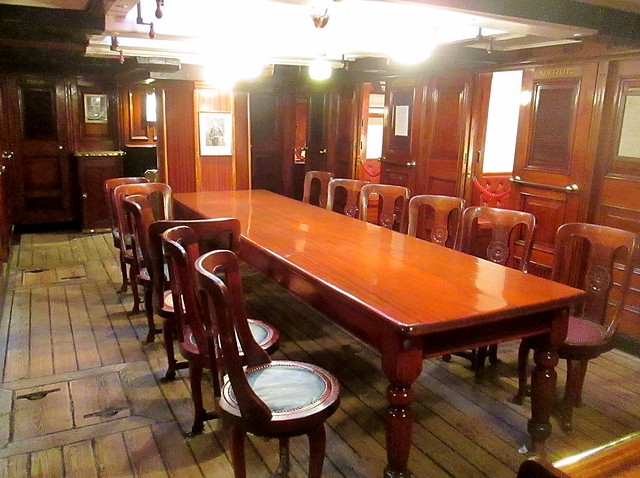 I was quite taken with the officers cute wee rooms until I was told that they were the coldest part of the ship and the mattresses regularly froze up as they slept in them. 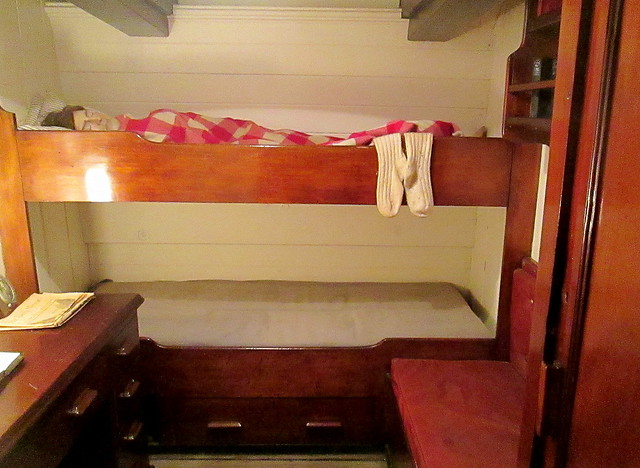 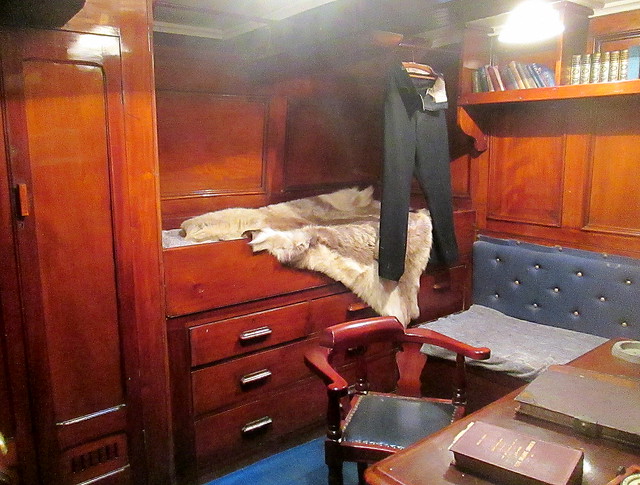 Shackleton’s cabin below isn’t quite so plush. 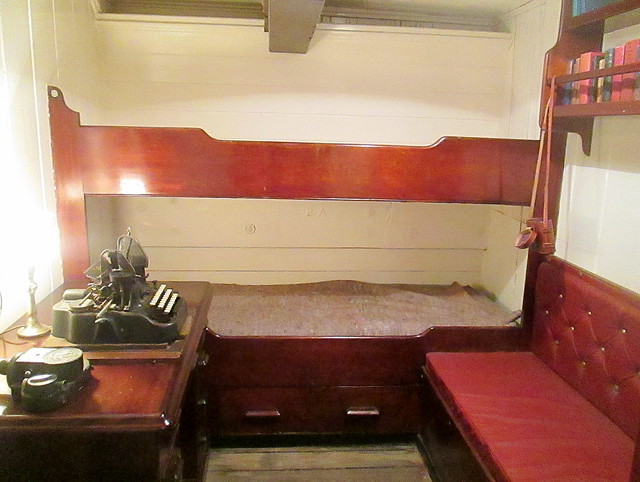 They had a gramophone player and a harmonium for entertainment, the harmonium is in the exhibition centre and is behind glass, presumably so that people can’t have a go of it. I was amused to see that the cast iron pedals say ‘mouse proof’ on them. It’s impossible to see that with all the reflections though. I suppose that harmonium bellows were made from leather which was apt to be gnawed by rodents. 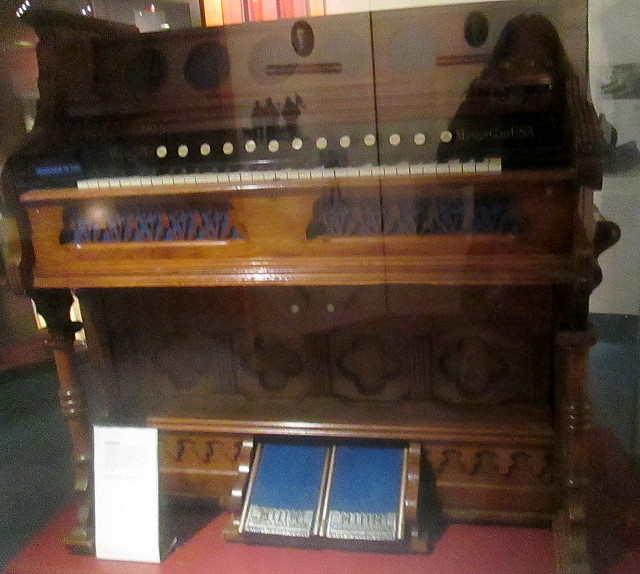 They also wrote their own newspaper articles – for The South Polar Times – to keep their spirits up, some of them drew cartoons, it was all very light-hearted in a black humorous sort of way. When they got back home they were printed and bound with a very small amount of copies being published. They put on plays and shows with the men inevitably getting togged out in women’s clothing. 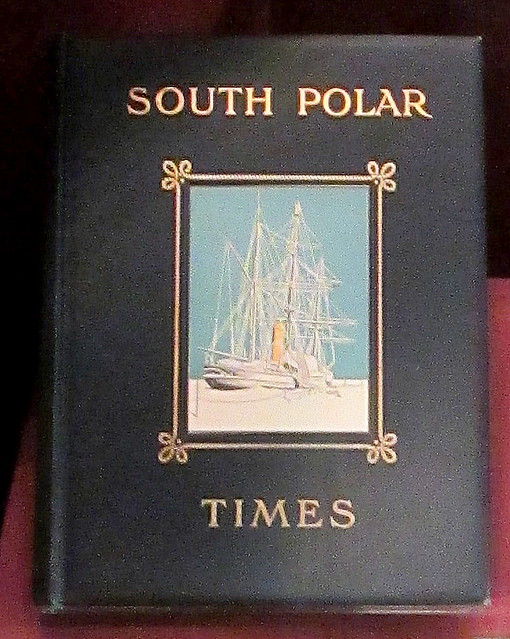 Discovery cost £51,000 to build which is the equivalent of £4.1 million in modern currency. She did have a coal-fired steam engine but relied mainly on sail as they didn’t have enough storage space for the amount of coal required for a long voyage.

The Antarctic expeditions weren’t only about staking a claim on the territory for Britain, they also conducted important science experiments and made great discoveries. 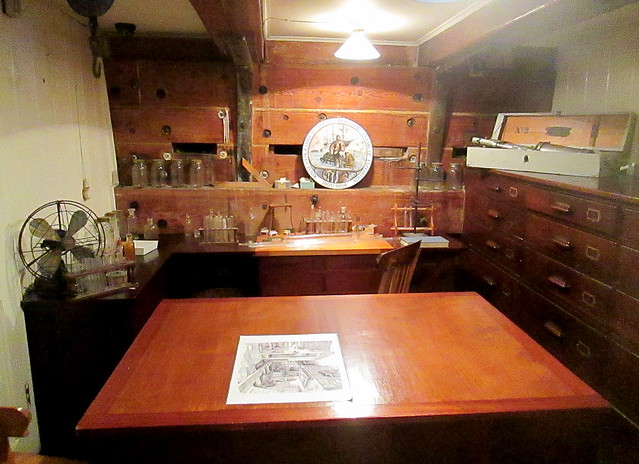 6 thoughts on “RRS Discovery at Dundee”