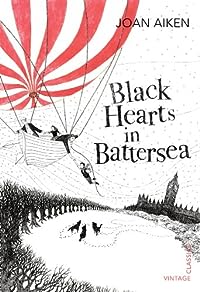 Black Hearts in Battersea by Joan Aiken is the second book in this series and was first published in 1965.

This book features some of the characters from The Wolves of Willoughby Chase. Simon travels to London with his donkey, he’s determined to become an artist and has a letter of introduction.

This is an alternative history, the setting is London in the 1830s, and King James III is on the throne which means that the Stuart dynasty is still on the throne which of course didn’t happen. But the Hanoverians are plotting against them and planning to grab power. There’s a group of Londoners willing to help and they’re stock-piling guns and ammunition.

But people are disappearing, including Simon’s friend Dr Field. Will Simon be able to track him down?

I enjoyed this one but I’m really looking forward to reading the third book in this series Nightbirds on Nantucket, which is the first one I bought, purely because the blurb sounded absolutely crazy.