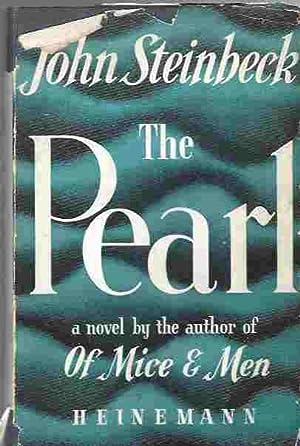 The Pearl by John Steinbeck was first published in 1947 and my copy seems to be a first edition, not that I bother about such things, it cost me all of £3. It’s a very slim volume, so I read it in no time at all – a bedtime read.

It begins early in the morning in a shack in Mexico where Kino, a pearl fisher, and his wife Juana are just waking up. They have one child, a son called Coyotito, the centre of their lives, so when he is bitten by a scorpion they’re panic stricken.

They have no money to pay for a doctor and hope that Juana’s swift action in sucking out the poison will save the child. But Juana still wants to go to the doctor to make sure, the doctor isn’t much better than a quack and he’s not interested in helping the child of peasants who don’t have money to pay him.

Kino is desperate to find a large pearl, thinking that that would solve all of their problems, but when miraculously he does find a huge pearl it brings out the worst in just about everybody around him.

This is a story about greed and envy which was apparently based on a Mexican folk tale. It’s not exactly uplifting and I can’t say that I really enjoyed it much, in fact it’s quite depressing, but no doubt it’s quite realistic in its portrayal of human character.

2 thoughts on “The Pearl by John Steinbeck”