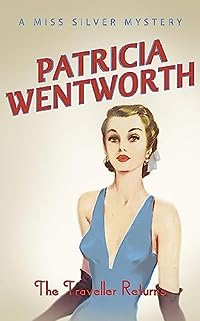 The Traveller Returns by Patricia Wentworth is a Miss Silver mystery and it was first published in 1948. As has often been said by many people – you can’t beat a vintage crime read when you’re in need of a respite from your own world. Not that there’s anything desperately wrong here at Pining but I’m just so fed up with the weather and this never ending winter. Snow again – and although that isn’t unusual at Easter in Scotland, it is unusual when we’ve had so much snow on and off since October.

Anyway, back to the book. The Traveller Returns cheered me up despite the weather. The setting is Britain in wartime. Philip Jocelyn’s wife Anne had died in the dark on a beach in Brittany while trying to escape Nazi France early in the war. Three years have passed since then and Philip has fallen in love with Lyndall who had been one of Anne’s bridesmaids.

But Anne turns up back in England and walks into her home – mink coat, pearls and all, she says that it was her cousin Annie Joyce who had died on the beach. Annie and Anne did look remarkably alike apparently but Philip isn’t convinced although everyone else is. He’s sure it was his wife Anne that he had had to bury quickly.

Enter Miss Silver, retired governess and now successful private detective, although you wouldn’t know that from her shabby appearance. All is well as she gets to the bottom of it all, whilst knitting up stockings and socks for Ethel’s husband and three little boys. A very enjoyable read.

8 thoughts on “The Traveller Returns by Patricia Wentworth”