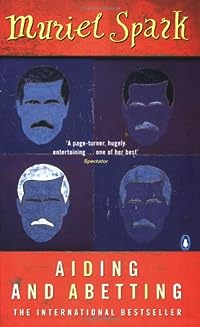 Aiding and Abetting by Muriel Spark was first published in 2000 and it’s the second last book that she wrote. I’ve found Spark’s books to be distinctly uneven and quite a few in my opinion are over praised and I have a theory about that but – later.

Having said that though I found this one to be a lot more entertaining than I expected it to be given the blurb on the back. Normally I’m not all that keen on fiction which involves real people as characters but in this case it works and is acceptable I think.

The actual person involved is Lord Lucan and I well remember watching the news one evening in 1974 – Lord Lucan was missing and his wife was seriously ill in hospital having been battered by him, the nanny had been bludgeoned to death. Lord Lucan was helped by his rich and influential friends and he never was hunted down despite being sought all over the world.

In this book a well-known and very successful psychiatrist Dr Hildegard Wolf is surprised when a man walks into her consulting rooms claiming to be Lord Lucan. He wants her help, she has a strange way of treating her patients as she spends her time talking about herself, but charges the patient a huge fee at the end of each consultation, you have to be wealthy to be able to consult Dr Wolf. What puzzles Dr Wolf most is that she now has two patients claiming to be Lord Lucan and they both look like him.

She wonders if they are working together somehow and have some ulterior motive. As Dr Wolf has a big skeleton in her own cupboard she’s very worried.

This is quite a dark book, but also amusing, I can’t make up my mind about its rating on Goodreads but I’ll probably be generous and give it a 4 as it merits more than a 3.

Now a bit about my theory on Muriel Spark’s reputation. I know that she was a bit of a party animal and she made friends with lots of well-known and successful writers who no doubt helped her a lot when she was forging her own writing career. Nowadays we would probably say that she went on a charm offensive! I suspect that there were plenty of other people writing better books at the time who never got them published due to not having the right connections, but such is life.

The other thing that strikes me about this Penguin copy of the book that I have is that it dates from 2001 and it cost £7.99 or an eye-watering $16.99 Canadian dollars. It has 210 pages, but the print size is massive, it could almost be described as being large print so if it had been published with a more normal print size the book would have been less than half the size it is. Back in the good old days Penguin would have published this novella along with another of her novellas (I have at least one of those Muriel Spark still slim volumes) and the price would have been the same as one normal sized Penguin book. So in 2001 we were being fleeced and probably still are!

4 thoughts on “Aiding and Abetting by Muriel Spark”