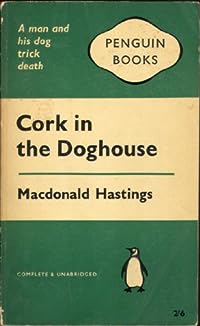 Cork in the Doghouse by Macdonald Hastings was first published in 1957. This is the second book by him that I’ve read, I don’t think these books are all that easy to find which is a shame because I really like his investigator Montague Cork who is now heading the Insurance Company that he has worked in all his life. In this book he knows that he should be thinking about retiring soon but he finds it hard to even allow his underlings to get on with their work without him looking over their shoulders.

One of his staff has agreed to insure a dog for a large sum of money. Honey is a Staffordshire bull terrier and her owner died leaving all of his money to the dog, until Honey dies, then the money goes to the descendants of the dog owner. There’s obviously an incentive for Honey’s life to be cut short.

I enjoyed this one which shows Monatgue Cork to be a keen dog lover despite the fact that Honey is anything but bonnie. She has been used in the past for illegal dog fighting and so Cork gets involved in a murky underground world peopled by a rough and violent element, not what Cork is used to but that doesn’t faze him at all.