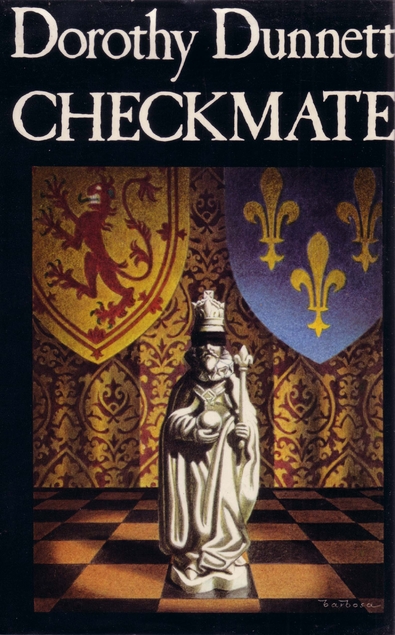 Checkmate by Dorothy Dunnett is the sixth and last book in Dorothy Dunnett’s Lymond Chronicles although in truth this series could just as easily have been named Philippa’s Chronicles. It was first published in 1975.

I loved this series and although I rarely re-read books as I have too many books that I want to read for the first time around, I can see that I might read this series again after a few years. Towards the end of this one I feared that it was going to be an unhappy ending to rival Thomas Hardy’s books, but – it wasn’t. It was however a great read.

Lymond had been determined to go back to Russia where he was almost certainly going to be executed by the Tsar, his friends are determined to stop him and with Philippa’s help he is taken to France. He’s not happy about it, but they are still waiting for their divorce and have to stay there until after the marriage of Mary Queen of Scots to the Dauphin. Strangely Lymond intends to re-marry as soon as he gets the divorce. Philippa is still being pursued by the ever constant Austin Grey. But Philippa is only interested in finding out the truth of Lymond’s parentage and destroying any evidence that might be harmful to him.

Lymond is leading the French army against England and Spain, but back in England Mary Tudor is in ill health and having trouble with her Spanish husband Philip. It’s a time of religious upheaval with the Protestant religion gaining converts, but they’re being persecuted for their beliefs.

These books are dense with detail and not easy reads but they’re well worth the concentration needed to get the most out of them.

Lymond has been suffering from migraines, almost certainly caused by stress. As a fellow sufferer I was glad to see how Dunnett described his illness. So many people claim to have a migraine when what they have is just a bad headache, nothing like a three day hell with constant vomiting at its height and often vision impairment followed by exhaustion. I feel sure that Dunnett must have suffered from migraines herself or lived with someone who did.

6 thoughts on “Checkmate by Dorothy Dunnett”