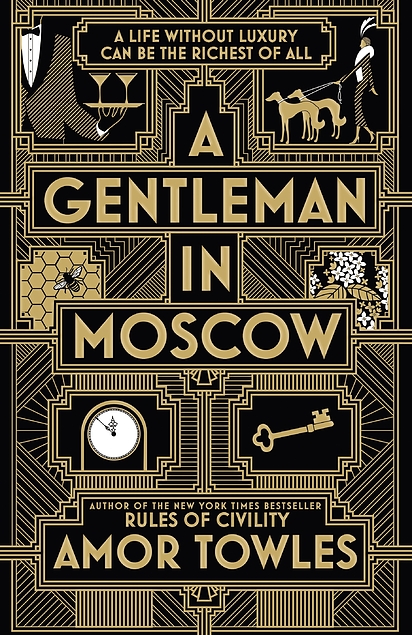 A Gentleman in Moscow by Amor Towles has been popular with some of the blogs that I visit, but it was when my friend Christine mentioned that she was enjoying it I decided to give it a go too and I loved it. It was published in 2016.

It begins in Moscow in 1922 where Count Alexander Rostov is in the Kremlin being questioned. Surprisingly he survives the experience but is declared to be a non person and soldiers escort him back to the Metropol Hotel where he has been living in a luxurious suite. He has been sentenced to indefinite house arrest, so if he ever sets foot out of the hotel he will be shot.

He has to vacate his beautiful suite and move into an attic room not much bigger than a cupboard. You would think that a man who had been brought up to enjoy the best of everything in life would find this intolerable but Sasha manages to make a rich and full life for himself and ends up having close relationships with the hotel staff who have become like a family to him.

With the Metropol being a favourite hotel of those in positions of power in the Kremlin over the years Sasha has plenty of opportunities to observe them – something which becomes very useful to him subsequently.

Sasha is a great character and I thoroughly enjoyed this book, I’ll be reading the author’s other book Rules of Civility soon, but I can’t imagine I’ll like it as much as this one.

10 thoughts on “A Gentleman in Moscow by Amor Towles”