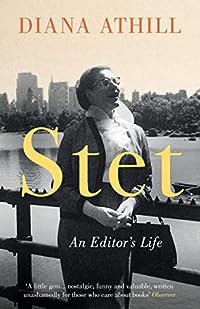 Stet by Diana Athill was first published in 2000. She decided to write this book when she realised that when she died all of her memories would be erased. I’m glad she decided to share them although she has gone on to live another 18 years since this one was published and has written more books.

This one is about how she became an editor and helped to found the publishing house Andre Deutsch. How they went about building up the business and the problems involved. It has to be said that for her the main problem seems to have been Andre Deutsch himself, and she does say that people have asked her over the years why she put up with being so badly treated by him. I suppose it was completely different times for women and she seems to have just felt very lucky to have a job that she enjoyed. However she was paid appallingly badly, considering that she was often hailed as the best editor in London. I suspect that she had a distaste of talking about money and pay rises.

In part two of this book Athill has written individual chapters on some of her favourite Andre Deutsch writers. Mordecai Richler, Brain Moore, Jean Rhys, Alfred Chester, V.S. Naipaul and Molly Keene. She seems to have got very involved with them and their private lives. I’m not sure how normal this is for an editor. I suspect it’s only necessary when writers are quite chaotic, as they often are.

I’ve come to realise that I’m usually better off not knowing a lot about authors I like as they’re often a disappointment to me in their personal lives. Gosh that makes me sound so judgemental and po-faced – but Jean Rhys in particular was a nightmare! It is a strange thing that quite a lot of female authors seem to have abandoned their children to almost strangers. Muriel Spark did that too and I know that Enid Blyton was interested in all children except her own, allegedly.

Anyway Stet is an interesting read although again Athill mentions Angela Thirkell as a writer that she really disliked. She says in this one that Thirkell is just embarrassing. I suspect that possibly this is because Athill’s sense of humour is very different from Thirkell’s. Or maybe she knew her and disliked her as a terrific snob, which she undoubtedly was, and also no great shakes as a mother either I think.

Anyway, I’ve wandered as is often my wont. Stet is an interesting and enjoyable read.

4 thoughts on “Stet by Diana Athill”