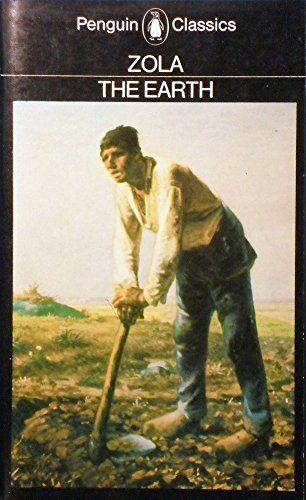 The Earth by Emile Zola was first published in 1887 and it’s part of his Rougon Macquart series and it’s the book that I got in the Classics Club Spin number 19. I’ve read quite a lot of books in this series and enjoyed most of them, I liked this one but it wasn’t exactly an uplifting read. My Penguin edition, translated by Douglas Parmee is 500 pages long and I was glad to get to the end of it, but apparently it was the author’s favourite novel.

Jean Macquart is now working as a wandering farmhand but previously he had been a corporal in the army, a veteran of the Battle of Solferino. When he reaches the small village of Beauce, north of Paris he decides to settle there, he’s attracted to Francoise who already has an illegitimate child with Buteau who is the youngest child of a local landowner. Buteau isn’t keen to marry Francoise but she decides to wait in hope that he will eventually. Meanwhile Jean says that he will marry her if Buteau won’t.

Buteau’s father Fouan is feeling his age and decides to split his land up between his three children who will work the land and pay their father a small pension from their farm incomes. Fouan’s older sister is very domineering, she’s nicknamed La Grande and she warns Fouan that he is making a huge mistake in giving up his land. She’s correct of course as as soon as Fouan gives up his land he feels that he has lost his status in the village, he’s just an old man of no importance now and it isn’t long before his children stop paying him his pension. They aren’t at all interested in him now that they already have their inheritance and they all start fighting amongst themselves. Fouan should have read King Lear.

Zola had obviously done plenty of research into the subject of agriculture and the problems that were faced by the peasants, the agricultural year is described as the peasants work their way through the sowing, reaping and then the wine-making and amazingly despite the hard work involved they always seemed to have plenty of stamina for illicit sex, they were a very loose-living bunch indeed. Under a hedge seemed to be a favourite place for it!

As ever though Zola’s descriptions are lovely and I intend to read my way through all of this series.