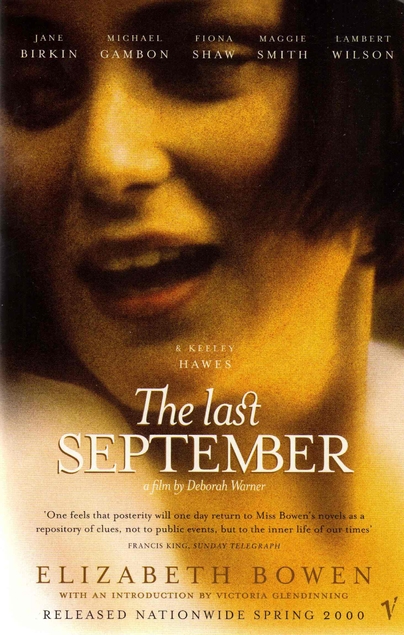 The Last September by Elizabeth Bowen was first published in 1929 and it was just her second book and I think it shows, although having said that I must admit that her first book The Hotel seemed far better to me. Her books are very hit and miss, I wasn’t at all keen on The Little Girls, but I did enjoy In the Heat of the Day.

Anyway The Last September was fairly recently made into a film and my copy of the book is the tie in. The film starred Keeley Hawes, Jane Birkin, Michael Gambon, Fiona Shaw, Maggie Smith and Lambert Wilson.

The setting is Ireland in 1920 at the beginning of ‘The Troubles’. The problem is that it takes great skill not to make reading a book tedious – if you’re writing about really rather boring parties. Danielstown is the local ‘big house’ which is owned by an Anglo Irish family. They’re very gregarious and as the area is full of very young English officers the house has been thrown open to them for tennis parties and dances. There are a lot of upper class single women around, presumably because so many men were killed in World War 1 and there are some pairings off despite parents saying that such pairings can’t happen because the officers are just out of school and have no money or prospects, or come from Surrey which is just the absolute end to the snobbish Anglo Irish.

But the young subalterns are there to do a job, and they have to go out looking for IRA men and searching for guns and it ends in disaster for some of the young people.

There’s an introduction by Victoria Glendinning who says that this is her favourite Bowen book but I felt that it was in dire need of a good editor, just too much meandering chat and thought, but obviously that appeals to other readers. I wasn’t keen on her writing style. I have to say that I went right off Bowen after reading The Love-charm of Bombs in which it’s described how she regularly took herself off to neutral Ireland during World War 2 when she had had enough of the bombing and lack of food in London.

Elizabeth Bowen was herself Anglo Irish – they were Protestants who were transplanted to Catholic Ireland from England for political reasons generations before, and the tragedy for them was that they weren’t truly accepted by either community, but that’s something that they never seemed to realise. Some of the locals would have been employed by those in the ‘big house’ as servants who I’m fairly sure would have despised them as being English and upper class and so they always lived in fear of being attacked and their houses being burnt down by the ‘real Irish’. That didn’t stop Elizabeth Bowen from actually having an affair with an IRA man – delusional I’d say, or she just liked living dangerously. I remember in the 1970s there were some terrible incidents with Anglo Irish people being murdered in their own homes, but presumably if they left their ‘big houses’ then they would never be able to afford the same standard of living in England.

5 thoughts on “The Last September by Elizabeth Bowen”