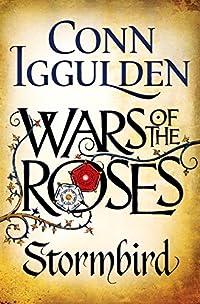 Wars of the Roses – Stormbird by Conn Iggulden was first published in 2013 and it’s the first book in a trilogy. After really enjoying reading the author’s Dunstan I felt the need to go onto this series, luckily my local library had a copy on its shelves. The subject matter was something that I knew absolutely nothing about. It begins in 1437. King Henry VI is young and inexperienced, after years of there being a regency as he was too young he is now supposedly in charge. In reality he’s just about as far from being a warrior king like his father as is possible. He spends his time praying, obviously isn’t looking after his health, hardly sleeps and consequently is often ill both mentally and physically. His doctor seems determined to kill him with bleedings and purgatives. He’s desperate for a long peace with France but the territories in France that have been won in battles over the years are under threat from the French.

In an effort to keep the peace Henry decides to marry Margaret of Anjou, a very young daughter of the Duke of Anjou. Part of the secret deal brokered by his spymaster Derry Brewer and William de la Pole, Duke of Suffolk is that Henry gives back some of his French territories including Anjou and Maine so they will be in French hands again. This infuriates the English men who had farmed the land for years and regarded it as their own. They still remember the men who had died in battle to gain the land. They’re thrown off the land by the French and often killed by French soldiers, the surviving refugees make for England to complain about their treatment. As they travel towards London the force grows ever larger and led by Jack Cade they storm the city.

Richard, Duke of York has ambition to usurp Henry, but Queen Margaret is determined to keep herself and her husband in power, despite his shortcomings. Margaret has to take over as Henry is unfit to rule.

I really liked this one. I knew next to nothing about this era of English history and I felt that I learned a lot, there’s a bibliography at the back so hopefully the history is mainly correct. I didn’t even realise that there was land in France called ‘Maine’ which is presumably where the state in America took its name from.

I’ll definitely be reading the next one in this trilogy.

Helen of She Reads Novels didn’t enjoy it as much as I did and you can read her view of the book here.

4 thoughts on “Wars of the Roses – Stormbird by Conn Iggulden”