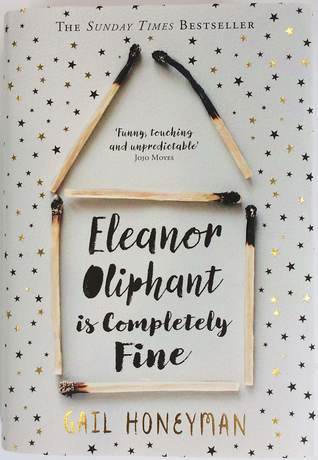 A lot of people seem to have been reading Eleanor Oliphant is Completely Fine by Gail Honeyman which was published in 2017, and I had no intention of doing so too as I tend to dodge what seems to be flavour of the month. Then I discovered that it’s written by a Scot and Jack borrowed it from the library and suggested that I should read it too – so I did and I really loved it. The setting is Glasgow but really it doesn’t feature in the book, it could have been set anywhere I think.

Eleanor Oliphant is almost thirty and working in the accounts department of a small company, despite having a Classics degree. She leads a very narrow life with no friends and has no idea how to interact with other people. Socialising is a complete mystery to her, consequently she’s seen as a bit of an odd bod by her work colleagues and it doesn’t help that one side of her face has been damaged by fire.

The one interaction she has apart from work is a weekly phone call from her mother who calls to abuse Eleanor verbally, she dreads the calls but seems unable to take control and put a stop to them. There’s a mystery about where her mother is. Is she in a prison, or maybe a state mental hospital? Obviously Eleanor has been badly damaged both physically and mentally by her upbringing. She’s still being visited by social workers and the only relationships in her life (if they can be called that) are with Polly her houseplant, Tesco supermarket which she loves and Glen’s vodka which she quaffs by the bottle at weekends. She definitely isn’t completely fine.

She’s suffering from arrested development among many other things, and she develops a huge crush on a musician who it turns out lives near her. Eleanor is convinced that her future lies with the musician and sets about transforming her image starting with a perplexing but hilarious visit to a waxing salon (French, Brazilian or Hollywood?) Slowly she begins to get to grips with modern life, helped by Raymond the IT guy’s friendship with her which develops when she needs his help with her computer at work, and bit by bit the reader learns about what has led to the development of Eleanor’s weird and anti-social character.

Or do we? As Jack says – she could be seen as being a very unreliable narrator and the truth could be completely different from how she portrays it. I like to think of her as a victorious victim though, but no doubt that is because I loved the character of Eleanor who had a hard time fitting in anywhere and understanding other people. I enjoyed seeing her learn how to interact in the modern world, even although that involved her doing things that I’ve never felt the need to do such as learning how to put on make-up or getting my nails done.

4 thoughts on “Eleanor Oliphant is Completely Fine by Gail Honeyman”