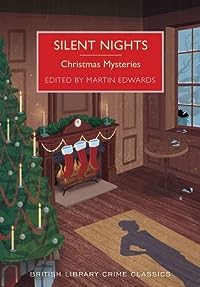 I’ve been away for four days, travelling around in the north-east of England and seeing the sights, before we need a passport to visit England, but I didn’t see as many sights as I would have liked to – so I’ll be back to see the Roman sites next time. I didn’t get an awful lot of reading done while I was down there but I did finish …

SILENT NIGHTS Christmas Mysteries edited by Martin Edwards was published in 2015 and it’s a compilation of fifteen short stories which all have a Christmas theme. There’s a short biography of each of the writers before their contribution to the book begins, they were interesting and informative. I had no idea that Marjorie Bowen also wrote under the names Joseph Shearing, George R. Preedy, John Winch and Robert Paye. She has two stories in this collection.

I found Cambric Tea that she wrote as Marjorie Bowen to be quite chilling. A wealthy man believes that he is being poisoned by his much younger wife, but all is not as it seems.

She wrote The Chinese Apple under the name of Joseph Shearing. A successful woman has to travel to London from her home in Italy after her sister dies leaving a young daughter who may need some attention from her reluctant aunt. Returning to the family home is an ordeal for the aunt who had been living in Florence. London is dingy and dirty and the house holds bad memories for her, things go from bad to worse as she realises that there has been a murder in the house across the road.

I had already read The Necklace of Pearls by Dorothy L. Sayers so didn’t bother re-reading it as I remember that I wasn’t too impressed by it, which is strange as I’m really quite a Sayers fan. I think in general though this is a really good collection. I don’t think much of the cover design though, which is surprisingly dull in my opinion, maybe there is a shortage of Christmas linked vintage designs. This cover was designed by Chris Andrews and isn’t one of his best book covers.

The Blue Carbunkle by Arthur Conan Doyle
Parlour Tricks by Ralph Plummer
A Happy Solution by Raymund Allen
The Flying Stars by G.K. Chesterton
Stuffing by Edgar Wallace
The Unknown Murderer by H.C. Bailey
The Absconding Treasurer by J.Jefferson Farjeon
The Necklace of Pearls by Dorothy L. Sayers
The Case is Altered by Margery Allingham
Waxworks by Ethel Lina White
Cambric Tea by Marjorie Bowen
The Chinese Apple by Joseph Shearing
A Problem in White by Nicholas Blake
The Name on the Window by Edmund Crispin
Beef for Christmas by Leo Bruce