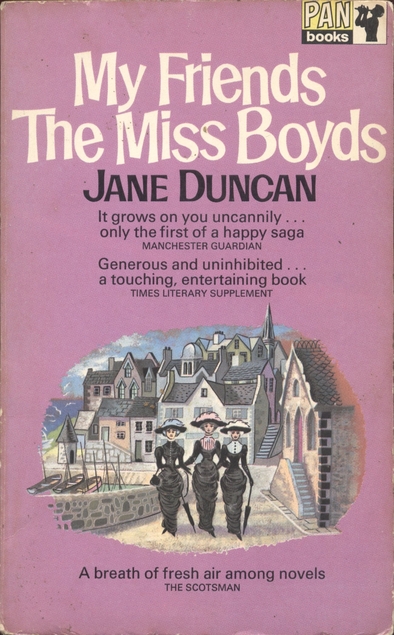 My Friends The Miss Boyds by Jane Duncan was first published in 1959 and it’s the first of a long series of books. The author whose real name was Elizabeth Jane Cameron was born in Renton, in the west of Scotland just a couple of miles from where I grew up but she lived most of her childhood at her grandparent’s croft on the Black Isle in the Highlands. Her books are very autobiographical.

The year is 1918 and Janet Sandison the narrator is eight years old. She’s usually called Janet Reachfar as it’s the tradition in the Highlands for people to have the name of the place they live as a surname. Reachfar is her grandparent’s croft and she lives there with her parents, her Uncle George and Tom, the hired man who is thought to be a bit lacking but is really as my mother would have said – “a’ there and a wee bit mair”.

Reachfar is four miles from the village so it’s an eight mile round walk for Janet to get to school, her main companions are George and Tom and she doesn’t have any toys, she has animals instead which she is responsible for, although her dog Fly is her nanny, taking care that Janet doesn’t wander off or fall down the well.

The most exciting thing that happens in the community is the arrival of the coal boat which happens only once a year and the dominie (schoolmaster) gives the schoolchildren a two day holiday to watch the unloading of it. The coal is unloaded last with all the ‘clean’ things, the winter stock for all of the shopkeepers such as food, drink, fabric and ironmongery, just everything that people need, first. One memorable time a large and beautiful brass bed was unloaded, complete with mattress, blankets and pillows – a gift for Granny Macintosh. So exciting was that that the kids ran alongside the delivery cart to see it being set up.

The Miss Boyds of the title are six unmarried sisters who have moved to the Highlands from a town, the youngest three still have a shop in Inverness and the locals think that they should have all stayed in town. They have no idea of how to even buy the coal and they spend their time giggling, fluttering and nudging each other. They soon gain a reputation for being man mad and nobody has a good word to say about them, until disaster strikes one of them and then the locals feel sorry for them and are forever sending them gifts of food.

I’ll definitely be reading the others in this series, when I can get my hands on them. They’re full of social history as well as humour and an unexpected bit of sadness too. I really appreciated too that although the book is set in 1918 Jane Duncan tied up all the loose ends and the time moves on to 1949 and she lets the reader know what happened to the main characters from 1919 to 1949.

Jane Duncan also wrote under the name of Janet Sandison.

The blurb on the back says: ‘An impressive first novel … the reader can see every scene and hear every speech … full of vitality’ The Observer

4 thoughts on “My Friends The Miss Boyds by Jane Duncan”