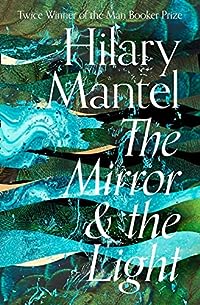 I finished The Mirror and the Light by Hilary Mantel this afternoon, so that took me eight days to read the 882 pages, I could have been faster, but I savoured every word. This last book in her Thomas Cromwell trilogy was well worth waiting for, but I can hardly believe that it has been eight years since Bring Up the Bodies was published. I don’t go in for much in the way of re-reading but I intend to read the whole trilogy again at some point in the future.

If you’re at all interested in the history of the Tudors then you obviously know how this story ends, but despite that 874 pages before Cromwell’s execution are still a riveting read and from about half-way through I slowed down my reading, not wanting the book to finish and at the end I felt quite bereft, knowing that I was going to miss being in Cromwell’s company.

Well, none of us is perfect and he had a lot of flaws, but given the circumstances he could have been an awful lot worse than he was and in the end it was his lack of brutality and cruelty to others at Henry’s court that brought his downfall.

Cromwell had always been able to see that given Henry’s nature the possibility of swiftly falling out of the king’s favour was almost inevitable, he could have sailed to Italy or some other European country with some of his wealth, but he left it too late as he loved being at the centre of power.

Throughout the book Cromwell thinks back to scenes in his life from his childhood on, replaying the abuses that he had to put up with from his blacksmith father Walter, and his life in Italy as a young man, the loss of his wife and daughters and before that the loss of his ‘Anselma’, for me this had the effect of a man drowning and seeing his past life playing out in front of him. He could clearly see where he had gone wrong, what he should have done differently in his incredible career but at the time he didn’t think he could do anything different. In reality though he knew that if Henry wanted rid of someone it was going to happen, there was no getting away from it.

I was really glad that Hilary Mantel wrote three and a half pages of author’s notes explaining what had happened to many of the other characters in the book, as it saved me from having to look them all up. She explained that she had been given encouragement from many historians, academics, curators and actors over the years which had included many distinguished names but had decided not to compile a list of acknowledgments. She thought that it would be like a vulgar exercise in name-dropping. I think that’s a bit of a shame as I imagine that if I had been one of those people I would have been expecting such an acknowledgement, and as a reader I would have been interested to know who had contributed help over the years.

Anyway, I suspect that this one will also win the Booker, it’s a great read.

12 thoughts on “The Mirror and the Light by Hilary Mantel”