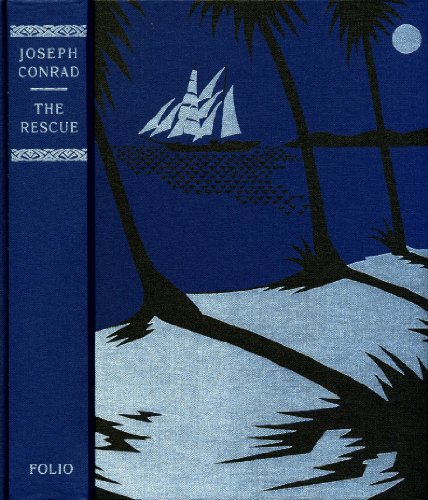 As we have a complete set of lovely Folio Joseph Conrad books I decided to read The Rescue by Joseph Conrad for the 1920 Club, apart from that, it was slim pickings on my bookshelves for that particular year.

Prior to reading this one I had only ever read one other book by Conrad – Lucky Jim – and I wasn’t too thrilled by that one as I recall although it was probably at least 15 years ago that I read it. Anyway, I must admit that I found the first two thirds of The Rescue to be a bit of a turgid slog. I consoled myself by reminding myself that not every book can be as non stop-action packed as a Dorothy Dunnett book, so I ploughed on.

Eventually things did speed up. The setting is the Malay Straits where Tom Lingard is sailing his ship The Lightning, he makes a good living trading in the area. The Lightning is approached by a boat seeking help. Their yacht has run aground on a mudflat and when Lingard boards the yacht he meets with its owner Mr Travers, he is obviously a snob, very rich and is suspicious of Lingard. He’s sure he’s some sort of pirate and is rude towards him. But Mrs Travers who is much younger than her husband is very attractive as far as Lingard is concerned, the feeling seems to be mutual. When Travers and his guest d’Alcacer leave the yacht to stretch their legs on the sandbank they are stranded on they end up being kidnapped by a local tribe. There’s been trouble among the tribes, and in the recent past Lingard had befriended the chief of another tribe, and had sold him arms.

Travers and d’Alcacer are in danger of being murdered and Lingard goes to where they are being held captive in an effort to get them released, despite the fact that he’s completely smitten by Mrs Travers, and her husband is such an unpleasant man. Mrs Travers is tasked with delivering a message to Lingard but for some reason she fails to do so. It all gets very messy.

There’s an introduction by Captain Richard Woodman at the beginning which of course I read after finishing the book. It enlightened me as to why The Rescue felt almost like it had been written by two different writers. Apparently Conrad began to write the book in 1900 but half-way through it he came to a standstill and just couldn’t progress with it. He gave it up and went on to concentrate on The Nigger of the ‘Narcissus’ which was a huge success, but he didn’t go back to The Rescue until 1915, and only then as his agent had nagged him to finish it. He still couldn’t do it and it was only in 1918 that he tried again and eventually saw his way around the writing problem he had – by then it was TWENTY years after he had given up on it half way through. That’s obviously why the pace picked up two thirds through the book, really he should have gone back and re-written the parts that were twenty years old.

This book is very much of its time and the ‘n’ word appears quite a lot. All the way through the book though I was amazed by the writing as Conrad wrote his books in English, a language that he didn’t even begin to speak until he was in his 20s. His first language was Polish, but he must have had a real talent for languages, he even uses a Scots word in this book.

I might read another of his books at some point in the future, but not anytime soon.

2 thoughts on “The Rescue by Joseph Conrad”