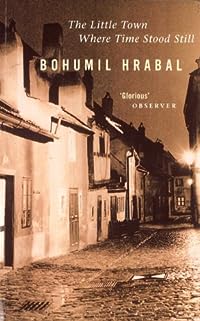 The Little Town Where Time Stood Still by Bohumil Hrabal was first published in Britain in 1993. It consists of two novellas which are loosely linked with some of the same characters. The setting is Bohemia, some time in the 1930s. The first one is called Cutting it Short and it’s narrated by Anna, a young woman who is married to Francin who is the manager of the local brewery. On the surface they aren’t very well matched as Francin is very serious and Anna is fun-loving, she is too friendly with their servants according to Francin and often behaves badly, not as the wife of a manager should behave. But Francin is very proud of Anna’s long golden hair. When she is setting off anywhere on her bicycle he holds it up and runs alongside her until she is going fast enough for it to flow out in the wind, otherwise it’s in danger of getting tangled in her bike.

When Pepin, Francin’s brother arrives Anna is happy that at last she will meet her husband’s brother. Pepin is a bit of a handful, he has quite a problem with alcohol and whenever he has money he can’t get rid of it fast enough, spending it on booze and the local ‘ladies of the night’. For some reason Pepin speaks with a Scottish accent, presumably the author wrote the character with a strong local accent and the translator, who grew up in Edinburgh decided to make the translation into Scots.

As ever with translated work I’m sure I’m missing things. Later in the story lots of things are being cut shorter by ten inches and Anna decides to have her hair cut too. Francin isn’t happy about that but almost worse is everyone else in the village is incensed by the loss of her golden hair too.

Strangely I also experienced this when as a 13 year old I decided to have my long apparently ‘golden’ hair cut too. I got my hair cut in the page boy style, it was all the rage in 1972. Nobody said anything to me about it, but there were several to my mind elderly bachelors in the neighbourhood who had never managed to cut their mummys’ apron strings, and they were all complaining to their mothers that I had cut my hair – and the mothers complained to my mother. That made me mad!

The second novella is The Little Town Where Time Stood Still, also published in Britain in 1993 but originally published in 1973. The schoolboy son of Francin and Anna is in awe of the men that he sees working on the river barges that he sees on his way home from school. He wants a tattoo like they have, one of a small boat is what he hankers after. The tattooist agrees to give him one on his chest but when he gets home he sees that he has been given a tattoo of a naked mermaid. He thinks his father will go mad when he sees it but while Francin is staring at the mermaid transfixed his attention is grabbed by ‘Uncle’ Pepin who is having one of his mad rants. He had come to stay with them for a fortnight and eight years later he was still there!

By now it’s WW2 but the war doesn’t seem to have much of an effect on the small town. Life goes on much the same. Francin spends his spare time taking his motorbike’s engine apart and getting the locals to help him do it, an experience that none of them are ever going to repeat.

With the end of the war comes Communism. As Francin was the brewery manager he loses his job as managers aren’t proper workers. Despite the fact that he was popular with the workforce they can’t help him.

I enjoyed these novellas which feature quirky characters and humour.

The blurb on the back says: ‘Hrabal combines good humour and hilarity with tenderness and a tragic sense of his country’s history.’ OBSERVER