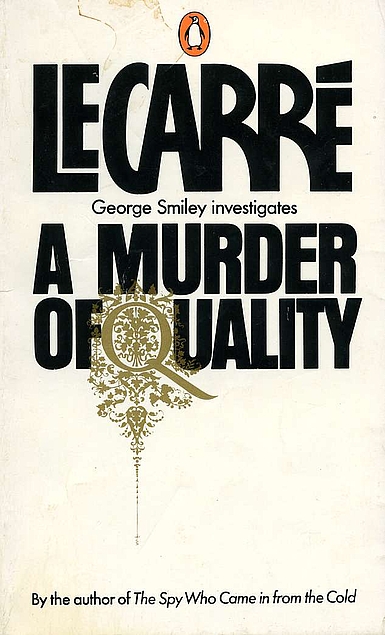 A Murder of Quality by John le Carre was first published in 1962 and it features George Smiley.

Miss Brimley is an old friend of George Smiley, she’s the editor of a magazine called Christian Voice which has a very small list of subscribers. One of them – Mrs Rode – has sent a letter to Miss Brimley which says she is sure her husband is going to kill her and that she has no one else that she can turn to for help. Miss Brimley passes the letter on to her old friend Smiley, asking him to investigate.

Stella Rode’s husband is a housemaster at a prestigious English public school called Carne, but by the time Smiley gets there the deed has been done. Carne School is the sort of place that Smiley is well used to, presumably having been to such an institution himself. It doesn’t take Smiley long to discover that there’s a lot of nastiness within the school with the schoolmasters and their wives being consumed by petty jealousies and snobbery.

The Rodes seemed to be a mismatched couple and Stella went out of her way to upset her husband, choosing to side with the local townspeople with whom she was very popular, rather than with the snooty schoolmasters and their wives. There are the usual ‘town versus gown’ tensions such as you get in places like St Andrews.

This was a very quick but enjoyable read. Apparently before John le Carre found fame as an author he had been a master at Eton and he was inspired by his experiences there when writing this book. Presumably there weren’t any actual murders at Eton, but I can imagine that there were plenty of character assassinations!

This was one of my 20 Books of Summer reads, the sixteenth. I think I might manage to read all twenty of them.