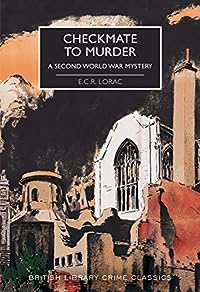 Checkmate to Murder by E.C.R. Lorac was first published in 1944 but has been reprinted by British Library Crime Classics who kindly sent me a copy to review. It’s just the second book by the author that I’ve read but I’ll definitely read more as I enjoyed it. I read her book Fell Murder last year.

The setting is London during World War 2 and Lorac makes a great job of evoking the foggy and dank atmosphere of the city. In Hampstead an artist Bruce Manaton and his sister Rosanne are renting a large studio, they also live there and their ancient and miserly landlord lives next door. Rosanne is a bit of a doormat, supporting her brother and putting up with his moods and as the mystery begins she’s cooking supper for her brother and two friends who are playing a game of chess while Bruce paints a portrait of an actor who is dressed as a cardinal.

Rosanne is constantly worried about money and is afraid that if their windows aren’t screened properly and show a chink of light then the special constable will fine them £5, they’ve had trouble in the past with him. But when there’s a commotion at the front door it’s the special constable who has a young soldier in custody, he claims that the soldier has just committed a murder.

Inspector Macdonald of Scotland Yard is called in to sort things out, but it’s not an easy task as everyone has an alibi.

E.C.R. Lorac lived in London throughout the war which no doubt went a long way to making the setting seem so authentic, you can just about smell the fog. Lorac also wrote under the name Carol Carnac, Lorac is obviously Carol backwards, but she was born Edith Caroline Rivett and wrote a lot of Golden Age mysteries.