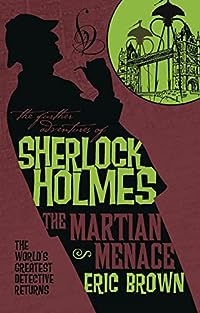 Sherlock Holmes and the Martian Menace by Eric Brown is the most recent publication in the series which is published by Titan Books. It’s not at all my usual kind of reading fare, I’ve never been a huge Sherlock Holmes fan mainly because I found his smart Alec observations to be quite tedious, thankfully they don’t feature too much in this book, but otherwise I think this strange mixture of the Edwardian era and SF works really well.

Earth has been invaded by Martians who are obviously much more technologically advanced than humans. The first invasion was very violent and culminated in many deaths but the invaders couldn’t fight off a common terrestrial virus (yep) so it was ultimately a failure. Six years later another Martian armada arrives on Earth, suposedly they’re peace-loving and their technological advances are very welcome by the people of Earth as they bring prosperity. There’s no doubt though that the Martians are in charge and Earth is just a part of their empire.

When Holmes and Watson are asked to investigate the death of an allegedly famous Martian philosopher and the investigation takes them to Mars, it isn’t long before Holmes realises that the whole thing is a con to get them to Mars.

All is not hunky dory on the planet and there’s a rebel faction, they’re not at all happy with those in power. Can they team up with Holmes and Watson?

I really enjoyed this book which has plenty of tension, interesting characters, is well written and also manages to convey an authentic Edwardian atmosphere at the same time as being futuristic.

I must admit that I was given this book by the author who is an old friend of ours. He writes science-fiction and also a crime series which is set in the 1950s. Although Eric Brown is a proud Yorkshireman he has been living happily in Scotland for several years now, but I’m not sure if he can be counted as a Scottish author.