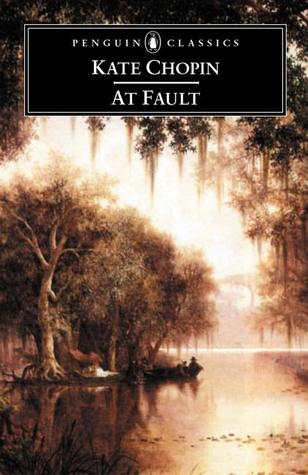 At Fault by Kate Chopin was first published in 1890. It’s the first book that I’ve read by the author.

The setting is a large plantation in Louisiana where Therese Lafirme’s husband has died and left her to run the place on her own, with the help of many Creole servants of course. I must admit that it was a long time before I understood why Therese had urged David Hosmer to re-marry Fanny, his first wife, when Therese was obviously keen on him herself.

As soon as Hosmer re-married Fanny he regretted it, Fanny is an alcoholic and had made his life a misery previously. He takes Fanny back to Louisiana where her drinking continues and Therese realises that she has shackled the man that she loves to a pathetic and deeply damaged woman. Why did she do it?

Doh, I realised eventually that it was because she was a Roman Catholic of French descent and couldn’t marry a divorced man, it still seems bizarre that she should encourage David to re-marry his ex-wife, bringing Fanny into her own milieu.

There’s a lot of Creole dialect in this book but it’s not difficult to understand – please note that – anyone who complains about Scots dialect in books!

I believe this was Chopin’s first book and I think she must have improved with experience, but I don’t know if I would bother reading any more, unless anyone recommends a specific book by her.

6 thoughts on “At Fault by Kate Chopin”