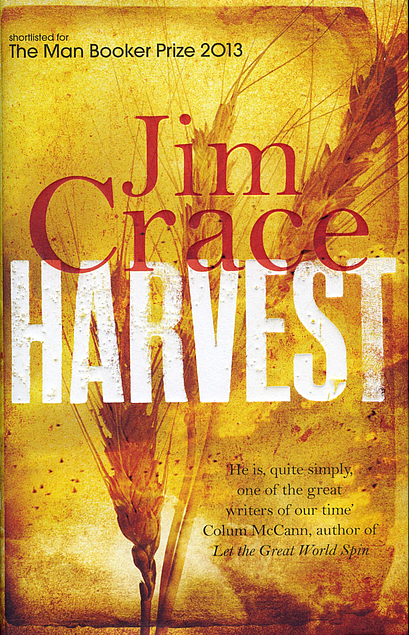 Harvest by Jim Crace was shortlisted for the Man Booker Prize in 2013. That year it was won by Eleanor Catton’s The Luminaries, which I haven’t read.

The events in Harvest take place over seven days in which the unnamed hamlet where Walter Thirsk lives goes from being a comfortable if very basic home for 60 or so souls to a place of devastation.

Walter has lived there for 12 years, he’s the only incomer, all the other inhabitants have intermarried over many generations, they’re all blond and Walter sticks out with his dark hair. Since his wife’s death he has realised that he has never really been accepted as one of them. When three strangers set up a shack nearby they’re instantly blamed for a fire that has just burned down the dovecote. In his heart Walter knows that some of the villagers did it but he doesn’t speak out which he comes to regret.

Unknown to the inhabitants big changes are coming to the hamlet, as the death of the landowner Master Kent’s wife means that the whole place is now owned by her cousin and he has big ideas to make the place profitable. It’ll be the last harvest as the much more profitable crop – sheep – are going to be moved in soon, very few people will be needed to look after them so the people will be redundant and moved off the land which will all be enclosed and off limits to everyone. The land had given them everything they needed to live, if frugally. Walter overheard the plans, but worse was to come with the new owner’s henchmen claiming that some of the females must be witches.

Jim Crace’s writing is good, but he didn’t place the hamlet in a particular area of Britain or even a distinct time, so there’s no real sense of place. I know that he did that deliberately as the same new laws that allowed landowners to fence off land that had previously been used by country folks to graze their animals affected all rural places, but I really like to know where I am when I’m reading a book.

When I was in second year in High School the history curriculum (Scotland) included studying the Enclosure Acts so none of it was news to me. I’m not sure if it was on the curriculum in England though.

6 thoughts on “Harvest by Jim Crace”