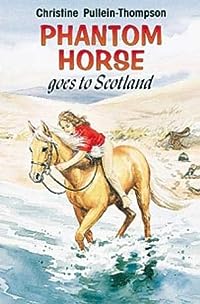 I went through a phase of reading pony books when I was probably about 9 or 10 and the Pullein-Thompson family wrote so many such books, it seems it was almost a family business, so I definitely read some of theirs back then, but not this one which was written long after my childhood.

Phantom Horse Goes to Scotland by Christine Pullein-Thompson was first published in 1981, it was later re-titled Phantom Horse Island Mystery.

It’s the summer holidays and Jean and her brother Angus are disappointed because their parents are having to go abroad because their father is a sort of diplomatic troubleshooter, he’s got to fly to the Middle East (nothing changes!) and their mother always accompanies him. But what will happen to the children?

Luckily Angus had seen an advert in a newspaper about The Island School and College of Further Education whch focuses on riding and dressage, ideal for Jean, and Angus can be coached on mathematics which is his weak point. Mr Carli is the headmaster and everything is arranged very quickly. The children fly to the Scottish island, as does Phantom, Jean’s horse!

Apparently Mr Carli had only recently bought the island and most of the original inhabitants had recently left to go to the mainland. There’s only one cottage which is still inhabited and they will be moving out soon as the woman is heavily pregnant. There’s something strange about the whole set up, but Jean is very happy with the training in dressage that she’s getting and the teachers seem fine.

When Jean and Angus realise that some new horses have been moved onto the island under cover of darkness they are sure there must be some sort of nefarious purpose behind it and their investigation leads to danger.

This was a very quick read and quite an entertaining adventure. I will give it three stars on Goodreads I think. I was a bit annoyed that as far as I was concerned there were some details of the tale which weren’t satisfactorily tied up.

It might seem unlikely that parents would send their children off for the summer to a place that they hadn’t even checked out, owned by a man that they knew absolutely nothing about, but some people did do things like that to their children. I was sent to Germany for a month to stay with a penpal and really we knew very little about the family, and it was the summer before I went to high school. I had to fly from Glasgow to Dusseldorf (where I got lost), then on to Stuttgart airport. I survived but I would never have done that to my own children! I still remember the shock I got when I saw the Nazi medals in pride of place in their display cabinet, everyone I knew at home had their WW2 medals hidden away in a drawer, and the one thing that my parents had warned me about was – do not mention the war!