Winter Holiday by Arthur Ransome was first published way back in 1933 but my copy dates from 1948 when according to the inscription ‘Dear Phil’ was given it by his Nannie for his 11th birthday.

The setting is the Lake District in winter where the Swallows and Amazons children are joined by Dorothea and her brother Dick, they’re staying with their mother’s old nurse over the school holidays. Very quickly they meet up with the Swallows and Amazons and they join forces to have lots of fun and adventures on the frozen lake. The snow and ice is just perfect for them as they’re pretending that they’re Arctic explorers, the local townspeople are Eskimos and when Uncle Jim’s/Captain Flint’s houseboat gets frozen in the ice it’s renamed the Fram, pretending that it’s the ship in Nansen’s Arctic expedition.

This is a lovely read with the children quickly becoming firm friends and discovering that they have a lot to learn from each other, they all have their own talents and are happy to share their strong points with the others. Dot and Dick are very good at ice skating but know nothing of semaphore or Morse code. Obviously the Swallows and Amazons children are good at sailing and that skill is transferable as toboggans are converted to sail across the ice on their runners.

There’s a lot to pack into this adventure and the school holidays are lengthened by over a month as Nancy succumbs to the mumps which means that the other children can’t go back to school in case they’re infectious. Everywhere has to be disinfected and even notes from Nancy have to be baked in a hot oven before they can be touched. Honestly, I can’t get away from infectious diseases!

This one was my 14th Book of Summer read. It was perfect cool reading over a few hot days. 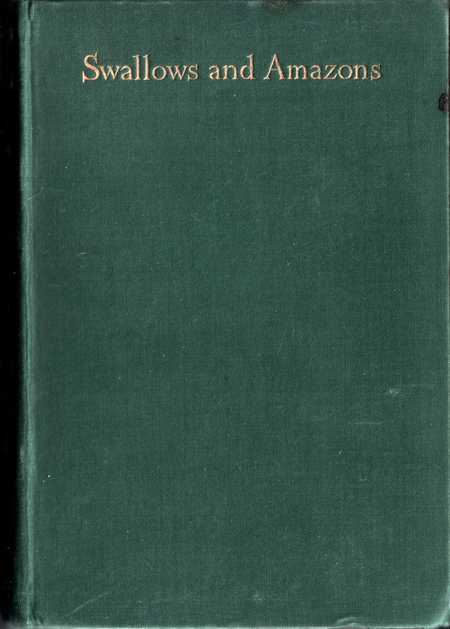 Swallows and Amazons by Arthur Ransome is the first book in the series which is set in the Lake District, I believe it was Coniston Water and Lake Windermere that inspired Ransome to write these books. I’m fairly sure that I read one donkey’s years ago but after we visited Coniston around this time last year I thought I would start at the beginning of the series again. This book was first printed in 1930 but my copy dates from 1942 and according to the inscription it was given to Frank for his birthday on 27th of August 1943.

The Walker children John, Susan, Roger and Titty (what possessed the author?) are in the Lake District for the summer holidays. Their mother is busy with the new baby and father is away, but has given the children permission to sail to one of the islands in the lake and camp out there. Mother gets out her sewing machine and makes a couple of tents and the children are well stocked up with food and equipment. They’re dab hands at sailing too and manage their borrowed dinghy Swallow professionally.

Sailing towards the island they sail past a houseboat, complete with a small cannon, a green parrot and a man that they name Captain Flint. He doesn’t seen at all friendly. The island seems perfect but there’s evidence of previous inhabitants with a pile of wood and the remains of a fire.

It isn’t long before another boat turns up, it’s called Amazon and is skippered by two girls who live locally. Nancy and Peggy fly a pirate flag and are up for adventures. John is impressed by their sailing knowledge and it isn’t too long before they’re all friends. It turns out that Captain Flint is really their Uncle and up until this year he had been good fun, but since he has started to write a book about his travels he has changed into a curmudgeon and sees the children as his enemy.

There’s a bit of a mystery going on but really the charm of this book is that you can’t help wishing that you too are by a lake with a wee boat to sail around in, visiting various islands and just getting away from it all.

It was different times though and I imagine that if parents allowed four of their children aged from 7 to 12 to sail off and fend for themselves social services would have something to say about it!

I believe that in the modern reprints of these books the character of Titty has her name changed to Kitty. I’m wondering what Titty was supposed to be short for – maybe Felicity of Verity but presumably in 1930 it wasn’t deemed to be faintly not nice for a wee girl.

Sometimes when I read books I have a particular piece of music going through my head, for this one it was of course Deacon Blue’s Dignity.