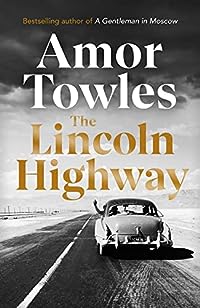 The setting of The Lincoln Highway by Amor Towles is 1954 Nebraska, and 18 year old Emmett Watson has just been driven home by a warden. Emmett has just finished serving a year long stretch at a work farm, his punishment for inadvertently killing someone. It isn’t long before Emmett discovers that two of the other inmates have hitched a ride to his home, hiding inside the boot/trunk of the warden’s car.

Emmett had had big plans for his release. With his mother having left home years before and his father’s recent death coupled with the fact that the bank had just foreclosed on the family farm, Emmett has nothing to stop him from chasing his dream of taking his younger brother Billy and driving west to California where he plans to start his own business. Farming isn’t for him.

The unexpected and unwanted arrival of the two inmates who have absconded throws all Emmett’s plans into the air. A lot happens over the next ten days but with remarkable calm he manages to cope with all of the problems that his sometime friends cause him, mainly because Emmett is determined never to act rashly again as that is what had led to him being at the work farm/jail in the first place.

The Lincoln Highway is well written and I enjoyed it, although not as much as the author’s previous books A Gentleman in Moscow and Rules of Civility, both of which I really loved.

I was very happy to be sent a digital copy of this book for review by NetGalley via the publisher Viking. Thank you to both.

7 thoughts on “The Lincoln Highway by Amor Towles”