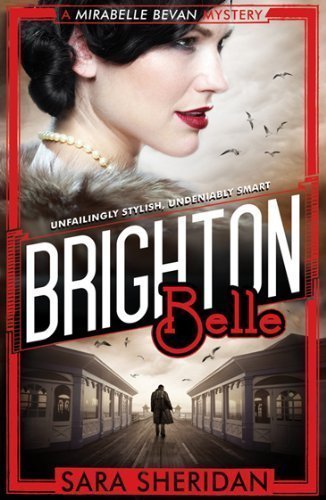 Brighton Belle by the Scottish author Sara Sheridan was published in 2012 and it’s the first in a series. The setting is Brighton in 1951.

Mirabelle Bevan had been in a hush hush job during World War 2 but she was desk bound so was never really in the thick of it. She’s now based in Brighton where she’s working with Ben McGuigan helping him to run his debt recovery agency, but Ben is ill with a bad cold so Mirabelle is left to cope on her own. When a client arrives asking for help to recover £400 from a woman he had loaned it to it leads to murder and Mirabelle finds herself using the skills that she had developed during the war. I really liked this one so although I wasn’t looking for another series to keep up with – I intend to do just that.

So next in the series is London Calling. I decided to request these books from the library quickly as they have a horrible habit of getting rid of books, particularly the earlier ones in a series – which is just madness.

The setting is mainly London in 1952 where a debutante has gone missing, last seen in a jazz club. It’s believed that Rose Bellamy Gore left the club with Lindon Claremont who is a young black saxophonist, so when she disappears it’s assumed that he has something to do with it. Lindon gets the train from London to Brighton to get help from his old family friend Vesta who has teamed up with Mirabelle in the debt recovery agency.

Mirabelle persuades Lindon to go back to London and hand himself in to the police, to help with the enquiries, which would be the sensible course of action – but maybe not for a black suspect.

There’s some use of the ‘n’ word in this one, and various other racist elements which I’m sure are very true to the atmosphere of the time, however they are always challenged by Mirabelle, I’m not sure how realistic that would have been, back in the day. Anyway, this was another enjoyable mystery. I really like the characters of Mirabelle and Vesta and the writing so I’ll continue with the series.

2 thoughts on “Brighton Belle and London Calling by Sara Sheridan”