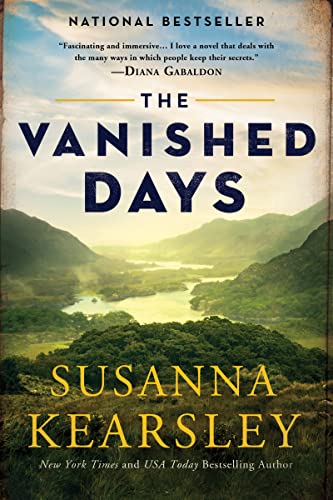 The Vanished Days by the Canadian author Susanna Kearsley is a prequel to her book The Winter Sea which I haven’t read, but I think this one can quite happily be read as a standalone. The setting is mainly Edinburgh 1707, the Union of Scotland and England, something which most ordinary Scots didn’t agree with but the ‘aristocracy’ sold the country for their own gain, so there’s discontent in the country. The tale loops back to the 1690s from time to time, and the disastrous Darien Venture which more or less bankrupted the country and led to the union with England. It’s suspected that the whole thing was an English plot. It was such a nice change to be reading about a different part of Scottish history as most authors stick to writing about the 1745 ‘Rebellion’, as if nothing else of significance ever happened in Scotland. Rebellion is in the air though with rumours of the French standing by to invade and help the Stewart King James III to regain the throne from the Dutch usurper King William.

Part of the settlement for the union is that England will provide money to pay off debts incurred because of the Darien scheme, including payments to the dependents of those who had lost their lives in Jamaica. Lily Aitcheson (Graeme) comes forward to claim her late husband’s wages, and Adam Williamson a former soldier has the job of investigating her claim, it’s suspected that she wasn’t actually married to her husband. But Adam is attracted to Lily and becomes embroiled in her life. There are lots of surprises along the way. This is not the sort of book that you could call a light read, but I loved it.

I was sent a digital copy of this book for review by Simon and Schuster via Netgalley.

6 thoughts on “The Vanished Days by Susanna Kearsley”