Here I am Bookshelf Travelling again, it’s the shelf above last week’s travelling and it is home to some of my cookery books. On the left hand side there are two copies of the same book –

Cookery in Colour by Marguerite Patten This is the first gift that Jack gave me – he denies this however! Well I suppose he might have bought me some chocolates before buying the book. It did make me think that he was serious enough about me to want to make sure that I could cook and therefore feed him! I bought another pristine copy of the book at a church sale some years ago as my copy has come adrift from its cover and spine, despite being used very carefully. My dad took the book to work and made a plastic cover for it to protect it, so he must have seen something important about it in the family history in the future, if you see what I mean, sadly he died a few years after we got married. The book is very much of its time but I still use quite a lot of the recipes in it. Marguerite Patten was very well known and came to the fore in Britain during the war years when she concocted recipes to help women feed their families while struggling with a lack of ingredients due to the strict rationing. She died just a few years ago.

The Victory Cookbook by Marguerite Patten was first published in 2002 in association with the Imperial War Museum. It’s subtitled Nostalgic Food and Facts from 1940-1954. Food rationing lasted 14 years in the UK and didn’t end until the 4th of July 1954. Actually it was a bit of a rebellion from women that made the government of the day realise that they were pushing their luck, having rationing long after it had ended in mainland Europe. Marguerite Patten said that the recipes in this book show how difficult it is to cook without butter or margaine. I’ve tried a few of the recipes, such as Woolton Pie and it was quite tasty.

There are a few gardening books on this shelf. Beth Chatto’s Garden Notebook is a book that I’ve just realised I haven’t read although I have read other books by her. For a few years we lived near her famous garden and nursery in Essex, just as she was constructing it all so I did see some of the work going on, before we gave up on Essex and moved back to Scotland. I really have to get around to reading this one.

There are some travel books on the shelf and A Book of Scotland by G.R. Harvey dates from 1950. It’s the sort of book that is ideal for dipping into when you are at a loose end. It’s another one that I haven’t read from cover to cover. It’s published by A&C Black. It has a mixture of black and white and colour plates. It’s older than me and is in better condition!

Are you Bookshelf Travelling this week? 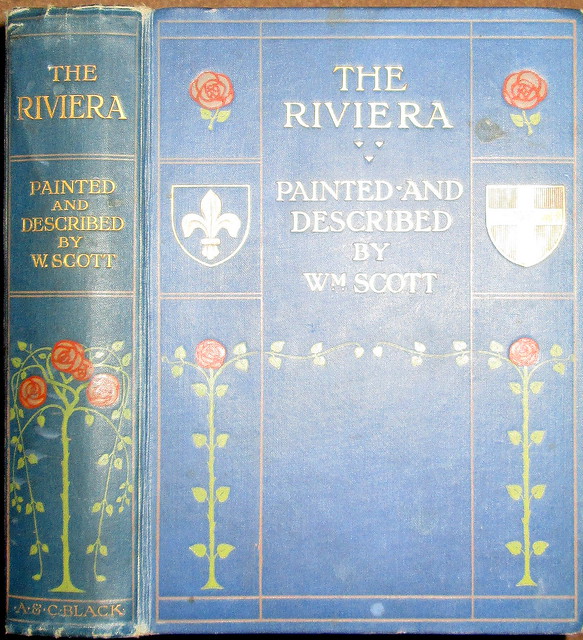 When Joan of Planet Joan and I realised that we both owned copies of this lovely book The Riviera by Wiliam Scott – but neither of us had actually got around to reading it – we decided to rectify that. You can read what Joan thought of the book here.

Unsurprisngly Joan and I thought much the same of the book. We both started off by thinking that Scott’s writing style was more than a wee bit purple prose-ish, but either he settled down as the book progressed, or we just got used to his style.

Lots of eating establishments are mentioned and sometimes warnings are given to the reader not to ask for any food as they will be shown the door quickly, as the patron wasn’t inclined to serve food.

Scott’s observations on customs officials is quite amusing, he really detested them and thought that there was really no need for them. I think that he would be shocked at how much more difficult foreign travel has become nowadays, with people not even being allowed a pair of scissors in their luggage.

He seemed to enjoy the French Riviera more than the Italian, partly I suspect because Italy was a poorer country and the food wasn’t as good, although he did mention that the food in France was often disappointing. On the other hand parts of the French coast had already been spoiled by too much development. I dread to think what he would say about the Riviera now as I recall someone saying that Cannes has changed from being a charming fishing village into a ghastly horror over the last fifty years.

He is scathing about the so called preservation of old buildings in Italy, which always seems to result in destruction rather than preserving. I was amused at this as only yesterday I was reading about similar things happening in Spain where the locals are up in arms at what so called experts have done to their local castle.

This is the first A&C Black book that I’ve read and I intend to track more of them down, although I suspect that I won’t be able to find many at the price I got this one for – the princely sum of £4, just a matter of months ago.